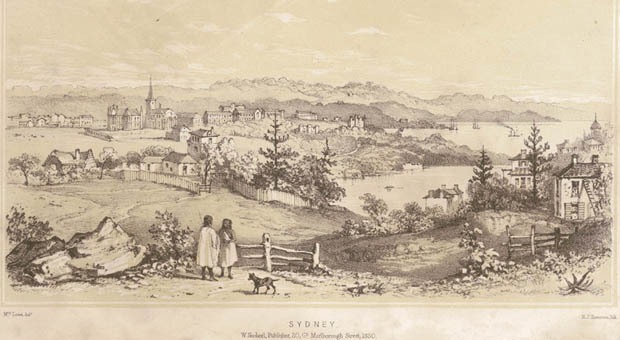 View of Sydney with Woolloomooloo Bay to the right, 1850 by R J Hamerton (image courtesy State Library of NSW - SPF / 987)

In 1997, an Aboriginal campsite was discovered at Junction Lane in Woolloomooloo during archaeological excavations ahead of the construction of the Eastern Distributor motorway. Underneath around a metre of recent ‘fill’ (historically deposited material such as gravel and rubble), archaeologists found some soil surviving from before the arrival of Europeans. The soil had been partly mixed with the introduced fill, but it contained at least 12 Aboriginal stone artefacts.

Aboriginal people manufactured or ‘knapped’ the artefacts at Junction Lane from several different types of stone. The stone was sourced from ancient river cobbles which do not occur locally, and Aboriginal people probably obtained them by trade with other Aboriginal groups living tens of kilometres away to the west or south. A piece of stone was cut from one of these large cobbles to serve as the ‘core’ or base stone from which artefacts were made. Archaeologists found part of one of these cores at Junction Lane. At this campsite, it is known that Aboriginal people heated some of the cores in a fire to make knapping them easier and more controlled. They then expertly struck pieces of stone from the cores using another stone. We know from other studies that some pieces like this were used as tools themselves, some were further modified into specialised implements, and others were simply waste material created by this process.

The campsite was originally located on mudflats along the eastern bank of Yurong Creek, above Woolloomooloo Bay. Freshwater would have been available from the creek, as well as a spring in the nearby sandstone. The forests and bay would have provided a wide range of foods and other resources and made this an attractive place to live. The disturbed condition of the campsite makes it hard to say much about how Aboriginal people used the area, but we can see that they produced and/or modified their stone tools there, either while camping or while travelling through the area. Archaeologists also found two pieces of glass among the stone artefacts, which may have been worked by Aboriginal people. If so, they provide physical confirmation of historical records showing that Aboriginal people continued to use the area after the arrival of Europeans.