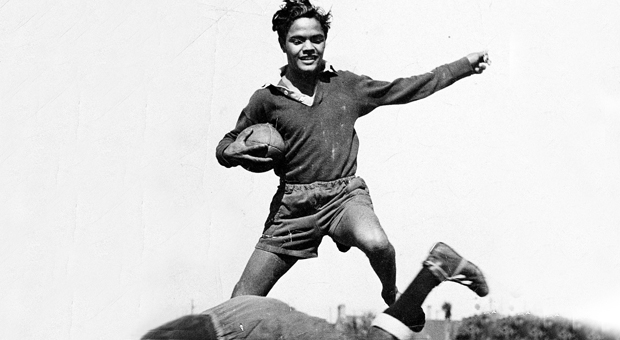 The dynamic and successful Redfern All Blacks rugby league team formed officially in 1944, but may have begun informally a decade earlier. The team attracted talented players from around NSW including Eric ‘Nugget’ Mumbler, Babs Vincent and Merv ‘Boomanulla’ Williams.

After a hiatus in the 50s, it reformed in 1960 with activist Ken Brindle as Honorary Secretary. The All Blacks played an important role in helping young Aboriginal men adjust to life in the city. It gave them confidence in their sporting ability, kept community and family ties strong and was a positive expression of identity. Training and matches at Alexandria and Redfern Ovals showcased talent and many players pursued professional careers, often with the South Sydney Rabbitohs.

The team’s success had important political, social and symbolic ramifications, and as an expression of community pride was a significant component in the shift towards self-determination within Sydney’s Aboriginal community.