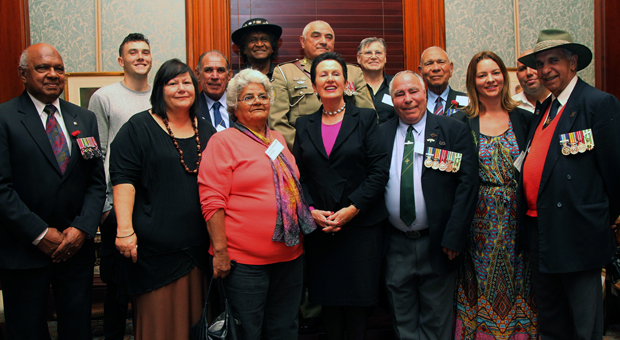 The City of Sydney’s history team started recording oral histories with Aboriginal and Torres Strait Islander service people in 2008. The project gained new impetus in 2013 with the commissioning of YININMADYEMI Thou Didst Let Fall the memorial artwork now installed in Hyde Park south. As part of the City of Sydney’s Eora Journey and ANZAC centenary commemorations, the artwork and the oral history project share a common objective: to honour Aboriginal and Torres Strait Islander servicemen and women.

Comprising 16 interviews with diggers and their descendants published on the Sydney Oral Histories website, the oral history collection is a major contribution to the historical record. Through the powerful medium of oral testimony, the interviews shed light on an under-documented aspect of Australia’s service history. Many accounts describe a family tradition of military service stretching back several generations to World War 1, and as far back as ancestors defending country in the frontier wars.

A complex picture emerges of Aboriginal and Torres Strait Islander experience in the Australian armed forces. There is ample evidence of discrimination, especially around veterans’ entitlements. The collection also includes stories of veterans’ exclusion from ANZAC Day marches, pubs and clubs. But reports of discrimination during active military service are few. Garth O’Connell, a curator at the Australian War Memorial who has researched Aboriginal military service, refers to the ‘green skin mentality’ of personnel in conflict situations. The interviews similarly depict the ‘front’ as an environment where barriers between ethnicities within a military unit are broken down. For those who grew up in pre-1967 Australia, the equal opportunity they enjoyed in the military contrasted sharply with their experience in civilian life.

The oral histories show the military has offered rewarding professional pathways to many Aboriginal and Torres Strait Islander people. But they also reflect the historical fact that from the time of Federation, legislation banned Aboriginal people from enlisting. When more troops were needed during World War I and two conscription referenda failed, the ‘colour bar’ was eased to allow Aboriginal people of mixed descent to volunteer in the Australian Infantry Forces (AIF). Even though they were denied basic freedoms and citizenship rights at home, it is now estimated that 1000 Aboriginal and Torres Strait Islander men served overseas in World War 1.

The collection includes personal and family stories of wartime sacrifice from World War 1 to Changi to the Battle of Long Tan, and of peacekeeping operations in Rwanda, the Solomon Islands and East Timor. Some of the men and women who took part in the oral history project are serving in the Australian defence force today. The collection also includes interviews with YININMADYEMI artist Tony Albert and members of Babana Aboriginal Men’s Group, including Pastor Ray Minniecon and Uncle Harry Allie and  who have been a driving force in the movement to recognise the Aboriginal and Torres Strait Islander contribution to the Australian armed forces.

Like all great works of art, YININMADYEMI Thou Didst Let Fall is a distillation of myriad stories and ideas. In conceiving the work, artist Tony Albert drew on the World War 2 experience of his own grandfather Edward Albert. But he knew from his research that his family history was not unusual. In accepting the commission, he saw an ‘opportunity to start a conversation; for the memorial to be used as this place of reflection, of telling oral stories.’ In this sense, the 16 interviews recorded by the City of Sydney’s history team are early voices in a complex and important conversation that will continue to unfold in the reflective space cast now opened by the work.

The interviews were recorded by Aboriginal scholar Dr Fabri Blacklock and oral historian Dr Margo Beasley. Publicly accessible at the City of Sydney’s Oral Histories website, the audio and transcripts will inform future research projects in this area.