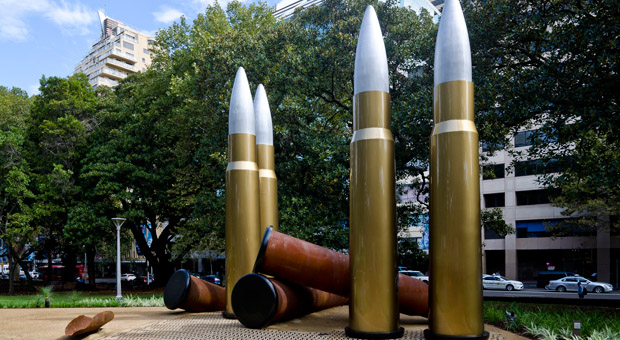 This major artwork in Hyde Park South honours Aboriginal and Torres Strait Islander men and women who served in our nation’s military and their families. Sydney-based artist Tony Albert created the work, inspired by the story of his grandfather Eddie Albert’s narrow wartime escape. The work is also based on research by family historian Trisha Albert.

The artwork YININMADYEMI Thou didst let fall depicts four standing bullets and three fallen shells. The bullet is a universal signifier for conflict. The arrangement of the bullets, with some standing and some fallen, represents those who survived and those who were sacrificed. The artwork also references the circumstances faced by Aboriginal and Torres Strait Islander service men and women when they returned to Australia. They were treated differently from their white Australian comrades who were given land for their service while Aboriginal and Torres Strait Islander people were still having their land taken away.

Second Lieutenant William Dawes arrived to Australia in 1788 as part of the First Fleet. His language notebooks produced within the first three years of British colonisation recorded the local language and culture shared by Aboriginal people. The notebooks are the most extensive record of the original language spoken by Aboriginal people at Sydney. The most well-known informant was a young Aboriginal woman named Patyegerang. Dawes translated yininmadyemi from the Sydney language as ‘thou didst let fall’.

Hyde Park south has historical significance as a ritual contest ground, a crossroads for traditional walking trails, and an important site for Aboriginal ceremony, gathering and camping. The park is also home to the Anzac Memorial.

Find out more on the City Art website here.

The most powerful artworks relating to war are those that use bold and evocative images to stir strong emotions. I have chosen the very confronting image of the bullet as it is a universal signifier for conflict, and I have chosen to arrange the bullets with some standing, and some fallen over, to tell a story. Tony Albert, Artist.

Tony Albert’s artworks are complex interrogations into the human condition. Mining imagery and source material from across the globe, and drawing upon personal and collective histories, Albert questions how we understand and imagine difference. In 2012 he became the first Indigenous person to be selected by the Australian War Memorial as an Official War Artist. Albert’s family has over 80 years of combined military service in the Australian Army, Navy and Air Force. He exhibits nationally and internationally and has been the recipient of numerous awards and prizes, including the Basil Sellers Art Prize and the Telstra National Aboriginal and Torres Strait Islander Art Award.