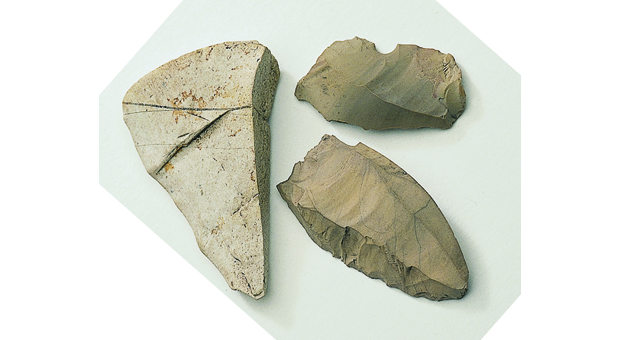 In the late 1970s, the NSW Maritime Services Board began to redevelop the Moores Wharf area at Millers Point on the end of the eastern shore of Cockle Bay (Darling Harbour). The board decided that an historic sandstone building from the 1830s, known as the Bond Store, would be dismantled and re-assembled nearby to make way for the development. In 1980, after most of the building was removed, archaeologists undertook an excavation around the remaining footings and found the remains of an Aboriginal campsite beneath a small section (only about half a square metre) of the rubble floor of the Bond Store.

The campsite consisted of a 10cm thick layer of shells and in the 30cm of soil below this, almost 400 Aboriginal stone artefacts were found. The shell layer is known as a midden. Middens consist of discarded food waste (shellfish, fish and land animals) that have been left by Aboriginal people camping near the coast. They may be the result of a single meal or the continued use of a camp over a long period of time. They can also contain the remains of cooking fires, stone, bone and shell tools, and sometimes human burials, but the Moores Wharf Midden contained only the remains of locally available shellfish including Sydney rock oyster, mud oyster, Sydney cockle, mud whelk and hairy mussel.

Underneath the midden were stone artefacts manufactured or ‘knapped’ from a wide range of different stone types. Aboriginal people would have obtained most of these types of stone by trade from tens of kilometres away to the west or south. The artefacts represented all stages of the knapping process, from hammerstones that were used to strike pieces from stone ‘cores’ to produce artefacts, to pieces of stone debris as well as some finished tools. These tools included a stone file and a number of ‘backed artefacts’, so-called because the side opposite its sharp cutting edge has been blunted or ‘backed’ to allow it to be hafted or perhaps even held. Studies have shown that stone files were used to grind shell, bone and wood, while backed artefacts were used for cutting, incising and drilling.

Curiously, among the stone artefacts were four pieces of European ceramics, which were of a style used a few years before the Bond Store was built on top of the Aboriginal campsite. This suggests that Aboriginal people used the campsite for a short time around the 1830s and that they were still carrying out many traditional tool production and food gathering activities at that time, despite Europeans having been in Sydney for almost half a century.

R J Lampert and M C Truscott, 1984. ‘The Archaeological Investigation of the Bond Store, Moore’s Wharf‘ (Report to the Maritime Services Board and the Heritage Council of NSW).