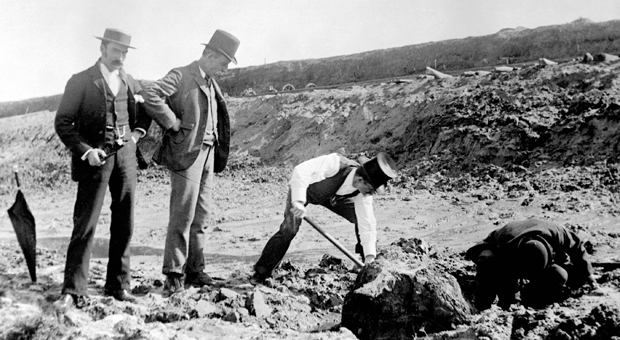 At Beaconsfield in the 1890s, workers on the Alexandra Canal began cutting through the sediments of Shea’s Creek and made some remarkable discoveries. The sediments were several metres deep and contained layers of shell, peat and old tree stumps. Among these layers they found the bones of a dugong. Geologist T W Edgeworth David and palaeontologist Robert Etheridge realised that this was significant and undertook some excavations and observations along the canal walls. Because the water in Sydney these days is not warm enough for dugongs to live in, the finds suggested that there had been a time in the past when the climate was warmer. Sea levels must also have been higher to allow the dugong to swim around what is now dry land.

Even more significantly, some of the ribs of the dugong and other bones had deep scratches and cuts that could only have been made by Aboriginal people. At the time, it was not believed that Aboriginal people had lived in Australia for very long, but if the dugong had lived in a time of higher, warmer seas then Aboriginal people must have also. Further proof of this was provided by three ground-edge stone hatchets that came to light in sediments a few hundred metres away. Although the hatchets were not associated with the dugong, they were also in buried sediments that suggested a considerable age. The finds showed that Aboriginal people had caught or come across the stranded dugong and butchered it with their stone hatchets.

Radiocarbon dating of some of the dugong bones has demonstrated that they are around 6,000 years old. Although there are more ancient Aboriginal sites in the area, such as a 10,000 year old campsite at Wolli Creek, the Shea’s Creek dugong is still one of the older sites around Botany Bay. It is also a very rare type of evidence of how Aboriginal people lived. It shows that Aboriginal people were using this part of Botany Bay hundreds of generations ago, and were adapting to a changing environment.

The bones of the dugong and the stone hatchets are currently held at the Australian Museum. But the banks of Alexandra Canal may still contain more evidence of past Aboriginal use.

Etheridge, R, T W Edgeworth David and J W Grimshaw, 1896. ‘On The Occurrence Of A Submerged Forest, With Remains Of The Dugong, At Shea’s Creek, Near Sydney’, Journal and Proceedings of the Royal Society of New South Wales 30:158-185.