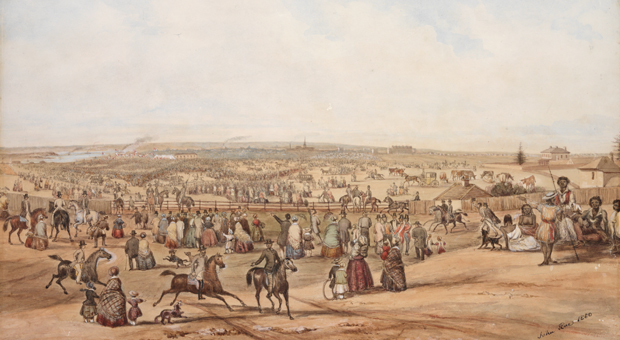 The turning of the first sod for the new railway station at Prince Alfred Park in July 1850, as depicted by John Rae (image courtesy Mitchell Library, State Library of NSW - ML 244)

Prince Alfred Park, earlier known as Cleveland Paddocks, was an Aboriginal camp site until the mid-19th century. Sydney’s Aboriginal people lived here, west of the city centre, until the coming of the railway in 1855 and the subsequent use of the park as the showground for the Agricultural Society. Sydney’s Aboriginal population had been earlier pushed to the fringes of the city, away from their traditional camping grounds around Sydney Cove at The Domain and Woolloomooloo.