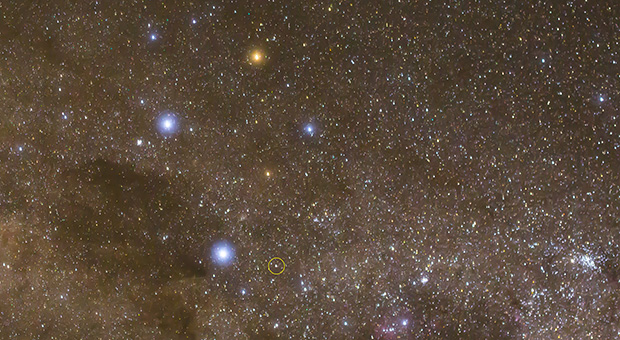 The star named ‘Koiki’ (circled) in the Sydney Observatory ‘Name-a-Star’ Catalogue is located below and to the west of Acrux, the bottom of the Southern Cross. (Courtesy Geoff Wyatt / MAAS)

Australian people observe Mabo Day on 3 June each year to commemorate Eddie Mabo’s courage and determination to overturn the fiction of terra nullius, recognising that First Nations peoples had rights to land prior to European settlement. On the 23rd anniversary of this day in 2015, Eddie’s name was memorialised with a star in the Sydney Southern Star Catalogue (SSSC).

This land is ours

On 20 May 1982, Eddie and a group of people from the Eastern Torres Strait lodged their case with the High Court of Australia. Mer was theirs, and they would prove legal ownership. For the next 10 years, 33 Meriam people researched and wrote 4000 pages of evidence and arguments to change laws to recognise Indigenous connection and traditional ownership of Country. Sadly, Eddie died just six months before the High Court’s decision in their favour.[1]

A pivotal decision was delivered on 3 June 1992 in the High Court of Australia: the lands of Australia were not terra nullius (land belonging to no one) and Meriam people held traditional ownership of the lands of Mer (Murray Island) in the Torres Strait. This landmark legal trial is known as the Mabo Case.[2] Mabo and Others Vs Queensland (No. 2) (1992) was a catalyst for land justice around the country. It led to the Native Title Act (1993) – a framework recognising Indigenous rights to, and interests in, certain land because of their traditional laws and customs.

Eddie ‘Koiki’ Mabo’s win in the decade-long case is commemorated every year with a dedicated day.

Written in the stars

On Mabo Day 2015, the Museum of Arts and Sciences named a star in honour of Eddie ‘Koiki’ Mabo. The naming ceremony took place at Sydney Observatory and the star was recorded in the Sydney Southern Star Catalogue (SSSC).[3]

In Torres Strait traditions, ways of being and knowing are closely linked to the stars.[4] For them, the night sky contains practical information about the natural world and are intrinsic to identity, belonging, understanding of self, and to culture and traditions.[5] The ‘Koiki’ star sits in the Southern Cross, which is in the hand of Tagai – a large Torres Strait constellation in the shape of a great warrior in a canoe. Tagai is important to nautical navigation. His appearance in the morning and evening throughout the year also inform seasonal changes, food economics and social structures.[6]

Rose Hiscock, former Director of the Museum of Applied Arts and Sciences, said at the naming ceremony that:

‘The stars have great significance for Aboriginal and Torres Strait Islander peoples. It is fitting that we honour Uncle Eddie through the dedication of a star in our most iconic constellation, the Southern Cross. This star is visible not only from the telescopes at Sydney Observatory, but also from Uncle Eddie’s home, Murray Island in the Torres Strait.’[7]

Gail Mabo, Eddie’s daughter and renowned artist, paid tribute to the star, her father, and her peoples’ complex understanding of celestial navigation in her works Tagai, Zenadth Kes, Mabo Case 1 and Mabo Case 2. These works were displayed as part of the 23rd Biennale of Sydney at the Museum of Contemporary Art. Gail used bamboo with cotton to make the artworks in the design of star maps.

‘Tagai is the constellation in the sky that we navigate by, that we plant by. To me, Tagai is very important,’ Gail told Art Gallery NSW.[8]

‘My spiritual beliefs come through my work. My star maps are a connection to my Dad – and to my forebears who used those maps to guide them across water – across Country. We’re only inhabiting this space for a while – when your time is up you leave, or you can choose to pack your bags before then and move on.’[9]

Danika Davis is an Aboriginal writer based on Ngunnawal Country (Canberra). She directs Neat Copy; a copywriting and editing business specialising in content for First Nations organisations and audiences.

[5] Hamacher, Duane W. 2017, “Dancing with the stars”: astronomy and music in the Torres Strait in Dreams of Other Worlds, Monash Indigenous Studies Centre, p. 3