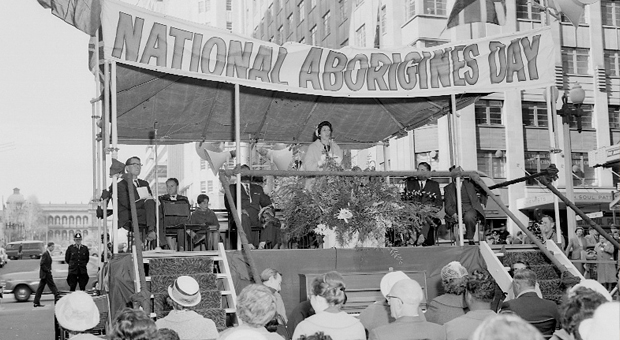 NAIDOC Week had its foundations in Sydney just over 80 years ago. There was a growing political activism within Sydney’s Aboriginal community in the early 20th century. The formation of the Australian Aboriginal Progressive Association (AAPA) in 1924, paved the way for the formation of the Aborigines Progressive Association (APA) in 1937 and the Day of Mourning Conference held on Australia Day 1938. On 26 January 1938, members of the APA, including Jack Patten, William Ferguson and William Cooper, organised the Day of Mourning Conference at Australian Hall on Elizabeth Street. They were protesting against the celebrations marking the 150th anniversary of the British Invasion of Australia. The conference at Australian Hall is regarded as one of the first Aboriginal civil rights gatherings in Australia. It was a major step towards redressing the wrongs of history against Aboriginal and Torres Strait Islander peoples.

After the Day of Mourning protest, William Cooper wrote to the National Missionary Council of Australia to seek their support to promote an annual day to ‘improve attitudes towards Aboriginal people’. Known as Aborigines Day, it was held on the Sunday closest to Australia Day from 1940 onwards.

In the mid-1950s, organisers decided to move this commemoration day to July as a way of also celebrating Aboriginal culture and heritage. In 1957, a National Aborigines Day Observance Committee (NADOC) was formed with support from federal and state governments, as well as churches and Indigenous organisations. Although National Aborigines Day was intended to promote the government’s assimilation policies, Aboriginal activists soon took it over. Martin Place was the site for rallies and events as part of this event from the early 1960s. As awareness of the different cultural histories of Aboriginal and Torres Strait Islander people grew, this day was expanded to recognise Torres Strait Islander people and culture. The annual event is now known as National Aborigines and Islanders Day Observance Committee (NAIDOC) Week.