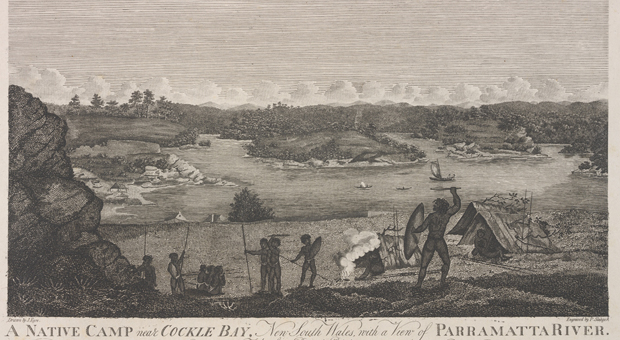 All people depend on fresh water to live, and so it is usually the case that reliable sources of water known to Aboriginal people were later used by Europeans. The most permanent of these sources in Sydney were creeks like the Tank Stream, and a number of springs, where freshwater continually seeped out of cracks in outcrops of sandstone. One of these springs was located at Pyrmont and was known to Europeans in the area as Tinker’s Well. Springs like Tinker’s Well were particularly valuable to Aboriginal people and Europeans on rocky peninsulas like Pyrmont, because freshwater creeks lay some distance away.

Tinker’s Well was located in a large sandstone overhang. In the early 20th century, an old Pyrmont resident recalled that ‘through the mosses and ferns’ of the overhang ‘trickled musically a small stream of pure, cold water’. The water collected into a natural dish in the sandstone floor of the shelter. Other Pyrmont residents recalled evidence of the Aboriginal use of Tinker’s Well, describing ‘numerous mussel shells’ and other shellfish that were still visible near the spring in the early 20th century. These were almost certainly an Aboriginal campsite, or midden, where Aboriginal people had camped and discarded food waste (shellfish, and the bones of fish and land animals). Residents also recalled that the natural bowl under the spring had been ‘roughly carved out’ long before it was enlarged by European quarrymen, and it seems likely that this was done by Aboriginal people using the spring.

Aboriginal people continued to live in the Pyrmont area into the 19th century, but quarrying and intense industrial and urban development in the area has destroyed most traces of their presence both before and after the arrival of Europeans. The shelter containing Tinker’s Well was destroyed in the early 20th century, but water continues to flow down sandstone outcrops behind a modern apartment building nearby in the vicinity of the original spring.