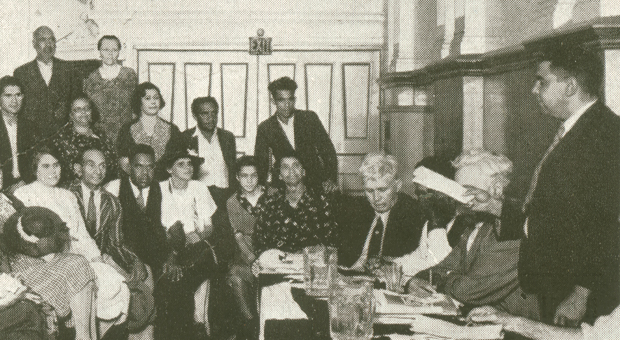 Jack Patten reading the resolution at the Day of Mourning in 1938 (photograph courtesy Mitchell Library, State Library of NSW - MLQ059/9)

This was where Aboriginal rights activist Jack Patten read the resolution on citizenship rights at the Day of Mourning Conference on 26 January 1938, which only Aboriginal people were allowed to attend. Activists including Patten, William Ferguson and William Cooper were protesting against the celebrations for the Sesquicentenary year of European settlement in Australia.

Australian Hall is considered by many to be the birthplace of the Aboriginal civil rights movement in Australia. In the 1990s, a legal battle was waged by local Aboriginal people and their supporters to recognise the social and historical significance of the building. It was listed on the State Heritage Register in 1999 and added to the National Heritage List in 2008.