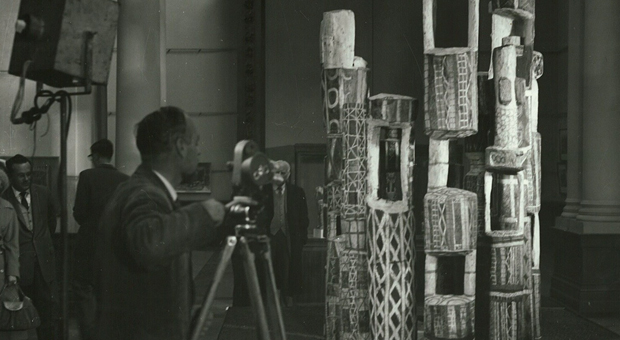 The Art Gallery of NSW was established in 1884, but only acquired its first Aboriginal works in the mid-20th century.

One of the gallery’s first collections of Aboriginal art was a donation of bark and paper paintings from the 1948 American-Australian Scientific Expedition to Arnhem Land. This donation prompted Deputy Director Tony Tuckson to expand the gallery’s holdings of Aboriginal and Torres Strait Islander art. One of its most significant acquisitions was a series of 17 Pukamani grave posts from the Tiwi Islands which were installed in the forecourt in 1959. This installation encouraged Sydney’s art going public to consider ‘traditional’ Aboriginal works as contemporary art.

Tuckson was the curator of the Primitive Art Gallery, which opened in October 1973. Aboriginal and Torres Strait Islander curators were first appointed to the Art Gallery of NSW in 1984. Yiribana Gallery was opened a decade later.