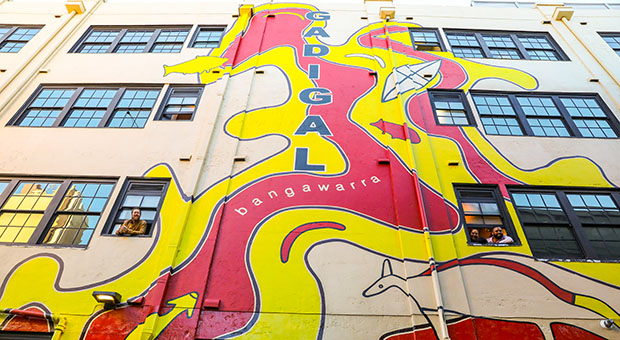 The Gadigal Mural is a public artwork on the back wall of the Australian Design Centre building in Barnett Lane, Darlinghurst. The collaborative artwork was designed by three Aboriginal artists: Dennis Golding, Lucy Simpson and Jason Wing. Their work references both the topographical patterning and material culture of Gadigal country.

The mural, stretching between Crown and Palmer streets, is over 25 metres long and 17 metres high. Its design features curved and circular lines that reference the geographical formations of Sydney’s land and water, as well as the pathways across county formed by Gadigal people before European settlement. Black outlines of objects and figures are filled with vibrant ochre reds and yellows, which in turn reference the histories and cultural practices of Sydney’s Gadigal people.
The artwork responds to the historical importance of this site as a place of making.

Archaeological excavations near the corner of William and Riley streets uncovered a rich deposit of stone tools made by Aboriginal ancestors, including a hatchet found in 1925, and 400 ‘knapped’ stone artefacts excavated in 2003. The word ‘bangawarra’, which is incorporated into the mural, means ‘make’ or ‘do’ in the Sydney Aboriginal language.

The mural was initiated by Australian Design Centre and created in partnership with the City of Sydney’s Art & About Sydney program. It was officially opened in May 2019.