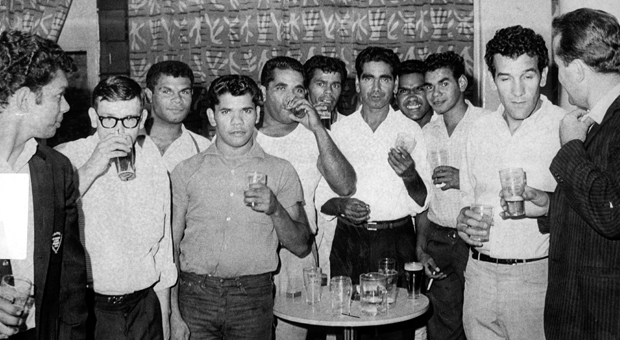 Aboriginal activists in the lounge of the Burlington Hotel on 20 March 1965. (Photograph by Ted Golding, courtesy Fairfax Media)

Aboriginal people were not free to drink in public bars in Sydney through to the 1970s. Although not upheld by law, this informal apartheid was enforced by patrons, publicans and the police. The imposition of this unofficial ban was a snub to Aboriginal people, and reflected the prevailing attitudes of non-Aboriginal people at this time.

On 21 March 1965, a group of 40 Aboriginal men staged a ‘sit-in’ demonstration in the lounge of the Burlington Hotel on the corner of Hay and Sussex Streets in Haymarket. The group led by Charles Perkins and Ken Brindle was protesting against the hotel’s policy to refuse admission to Aboriginal patrons.

The protest at the Burlington Hotel came a month after a group of Sydney University students took part in an event that became known as the Freedom Ride.