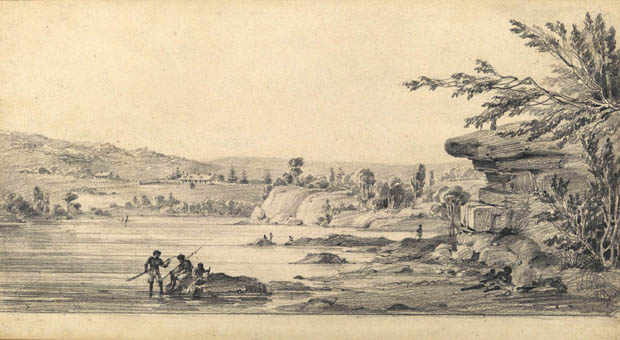 Yurong Point is known today as the site of Mrs Macquarie’s Chair, a seat carved from stone in the 1810s so Governor Lachlan Macquarie’s wife Elizabeth could enjoy the view of the harbour. It has remained a popular place ever since, but visitors follow in much more ancient footsteps. Aboriginal people lived around the point and fished its waters for thousands of years before Europeans arrived in Sydney. They were still using the area long after it became a popular scenic spot for Sydneysiders as contemporary images show. The area has been cleared of trees and landscaped extensively and most traces of the Aboriginal use of the point have been either destroyed or covered over, however, at least two Aboriginal sites remain and were found by an amateur archaeologist in the 1990s.

One is a sandstone rockshelter, which is a place where an outcropping piece of sandstone has eroded to form an overhang. Sites like this provided shelter for Aboriginal people to live in or produce art on the walls and ceilings. The Yurong rockshelter is big enough to have been lived in, but no evidence of this has been found. Two faint white hand stencils show that it was used by Aboriginal people. The stencils were made by one or two Aboriginal people placing a hand on the wall of the shelter and then blowing a mixture of white ochre, water and animal fat over it to create a negative image of their hand.

The other site is an Aboriginal midden. Middens are mounds of discarded food waste (shellfish, fish and land animal bones) that have been left by Aboriginal people camping near the coast. They may be the result of a single meal or the continued use of a camp over a long period of time. They can also contain the remains of cooking fires, stone, bone and shell tools, and sometimes human burials. They are important sources of information for archaeologists because the lime-rich shells aid in the preservation of bones that would otherwise quickly decompose in the soil.

The large midden is now buried under soil, grass and European rubbish. The shell species within the midden include Sydney cockles, Sydney rock oysters, hairy mussels, periwinkles and limpets. Some fish bones were also observed along with a small stone tool made of red silcrete, a type of ancient river cobble. Debris from later picnics by Sydneysiders in the 19th century has also been mixed into the midden, including clay pipes, ceramic ginger beer bottles and glass bottles.

The Aboriginal sites on Yurong Point give us a glimpse into the lives of the Aboriginal people who lived there. They fished and collected shellfish from the rocks and surrounding waters, and cooked and ate their meals on the point. And in at least one of possibly many shelters that once dotted the narrow headland, they left a personal and enduring mark of their links to the land.