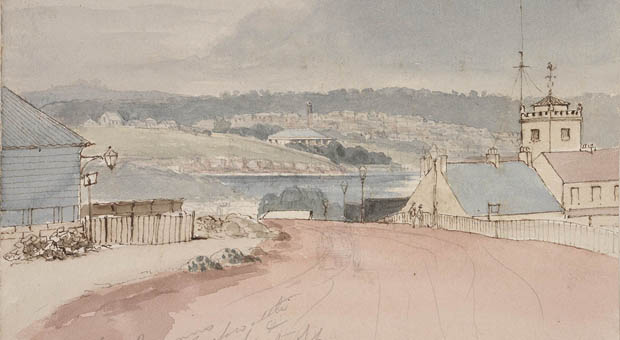 Blackwattle Creek was originally a tidal watercourse that flowed from swampy lands that are now within the grounds of the University of Sydney. The creek flowed from this swamp through a valley thick with wattle trees and then drained into Blackwattle swamp, at the head of Blackwattle Bay around Glebe. Prior to European settlement, the creek was a source of fresh water for Sydney’s Aboriginal people, and a place for fishing and other activities. During the early decades of European settlement the creek was located at the edge of town, but by the middle of the 19th century, the course of the creek was highly modified and densely inhabited by some of Sydney’s poorest residents.

Despite these impacts, some archaeological traces of Aboriginal people living along the creek have survived. The most substantial evidence has been found at an Aboriginal campsite located on the original banks of the swamp at the head of Blackwattle Bay. The campsite was situated in what is now the block next to Broadway between Mountain Street and Blackwattle Lane, and was found during archaeological excavations undertaken prior to the redevelopment of the block in the early 2000s. The archaeologists were investigating the remains of early European buildings, but they came across a small patch of natural soil and thought that it may contain evidence of Aboriginal use.

The area was excavated and found to contain 14 Aboriginal stone artefacts made of several different stone types commonly found in other sites in Sydney. The artefacts were probably discarded by Aboriginal people over time as waste material during stone tool manufacture or during activities such as hunting, butchering or the processing of plant foods. In other words, the site most likely represents occasional visits by Aboriginal people over time, rather than intense occupation, which makes sense as its location is not ideal, being in poorly drained low-lying swampy land.

Since the campsite was located, other evidence of the Aboriginal use of Blackwattle Creek has emerged. Single stone artefacts were found at two locations within the grounds of the University of Sydney, in what would originally have been the swampy headwaters of Blackwattle Creek. The first artefact was unearthed near the Fisher Library in intact soil surviving under masses of introduced soil and rubble. The second stone artefact was found in 2005 on sloping ground near Maze Crescent, but was in soil that had been deposited in the area during building activities associated with the university, so it may have come from somewhere else.

Another small Aboriginal campsite on Blackwattle Creek was found on the corner of Mountain and Smail Streets at Ultimo, on land that once formed the upper flats of the creek estuary. This site consisted of two stone artefacts and a piece of green bottle glass that had been shaped into a tool by Aboriginal people, showing that the area continued to be used after the arrival of Europeans. These artefacts were in disturbed ground and had probably been washed or transported there in soil used to reclaim the swampy ground in the late 19th century.

While these sites only give us a glimpse of how Aboriginal people used Blackwattle Creek, we can at least see that they were there, and that they continued to use the area after Europeans arrived in Sydney. The sites are also a reminder that physical evidence of this kind still survives in the city, despite two centuries of intense European activity. So we can expect to learn more about how Aboriginal people lived along Blackwattle Creek as more evidence comes to light in the future.