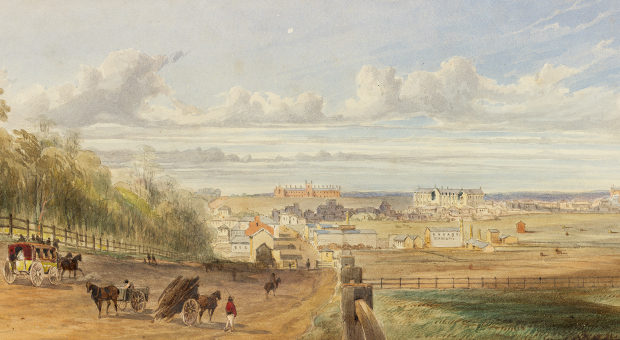 Blackwattle Creek was once a tidal watercourse that extended from its marshy headwaters at Glebe towards the suburbs of Redfern and Waterloo to the south. Lake Northam within Victoria Park is a remnant of this creek. It was one of a number of watercourses in the vicinity of the former Grose Farm Estate and the nearby suburb of Chippendale, and is a tangible reminder of the natural environment inhabited by Aboriginal people before the arrival of the Europeans.

Sydney’s landscape was greatly modified throughout the 19th century. The foreshores of the harbour were reclaimed, and the waterways in and around the inner suburbs, including Blackwattle Creek, were harnessed for use by industry as well as being diverted underground to allow for residential development. Throughout the 19th century, it was referred to as the ‘university waterhole’, the ‘horse pond’ or the ‘old dam’. In the 1960s, it was officially named Lake Northam for Sir William Herbert Northam, an alderman for the City of Sydney Council in 1956-65.

Victoria Park was the site of the Tent Embassy protest against the Sydney Olympics in 2000, and has been the venue for Yabun, an annual festival held on 26 January, showcasing Aboriginal and Torres Strait Islander culture, since 2002.