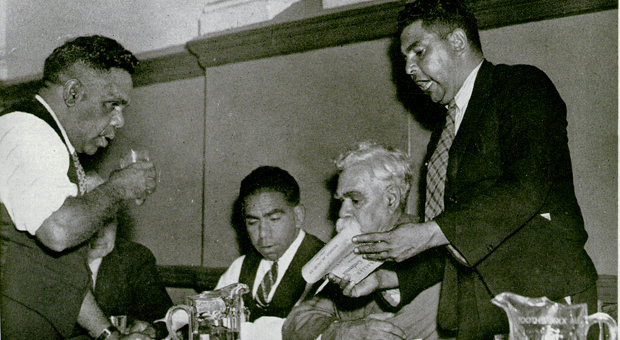 Jack Patten reads the resolution at the Day of Mourning Conference on 26 January 1938: 'We, representing the Aborigines of Australia…on the 150th Anniversary of the whitemen’s seizure of our country, hereby make protest against the callous treatment of our people…and we appeal to the Australian nation of today…for full citizen status and equality within the community.' (Man, March 1938 - Mitchell Library, State Library of NSW - MLQ059/9)[http://www.aiatsis.gov.au/collections/exhibitions/dayofmourning/26jan.html]

John (Jack) Patten was a public speaker and William Ferguson’s collaborator in the early days of the Aborigines Progressive Association (APA). He was born in Cummeragunja on the Murray River; unlike many Aboriginal people at the time, he attended high school and he also had some success as a boxer. He settled at La Perouse in 1928 and became an experienced organiser and public speaker, regularly speaking on Aboriginal rights at the Domain on Sunday afternoons along with other Aboriginal activists like Pearl Gibbs and Tom Foster.

Jack Patten and William Ferguson were the main political organisers of Aborigines in Sydney, and together they published the manifesto ‘Aborigines Claim Citizenship Rights’, organised the 1938 Day of Mourning Protest and with Ferguson led an Aborigines Progressive Association (APA) delegation to meet the Prime Minister, Joseph Lyons and his wife.