The Edge of the Trees 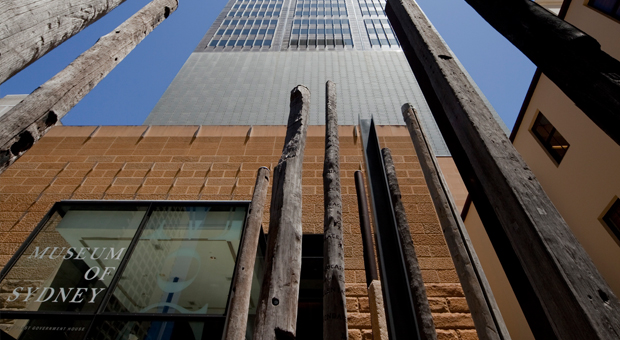 The Edge of the Trees in the forecourt of the Museum of Sydney (photograph by Brett Boardman, courtesy Historic Houses Trust)

This public artwork created by Fiona Foley and Janet Lawrence is located in the forecourt of the Museum of Sydney on the site of First Government House. The Edge of the Trees symbolises the interaction between Aboriginal and non-Aboriginal people at this place, which was a significant site of first contact.

The Edge of the Trees is made up of a series of upright timber, stone and steel poles, each inscribed with words from the Sydney Aboriginal language. The sculptural form is accompanied by a soundscape featuring the names of the Aboriginal people of Sydney and the convicts who arrived in Sydney on the First Fleet in 1788.

The Museum of Sydney displays a number of other art works by Aboriginal and Torres Strait Islander artists representing the theme of reconciliation, as well as the Gadigal Place Gallery which commemorates the history of the local Aboriginal people.