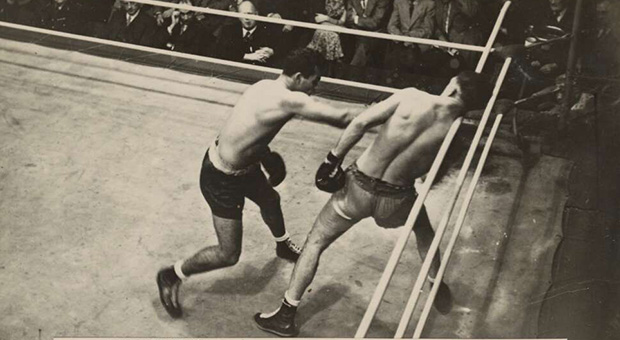 Tom Laming’s Golden Gloves gym was the chosen training ground of many talented fighters across the four decades of its existence. Laming opened his first boxing gym in 1947 at the rear of 15 Westmoreland Street in Glebe, near the intersection of Mitchell Street and Westmoreland Lane.[1] Laming’s Golden Gloves gym was relocated to the upper level of 49 Glebe Point Road by the 1970s.[2]

The great Dave Sands trained at the Westmoreland Lane gym when in Sydney.[3] Large crowds of fight fans and interested onlookers packed the gym to watch Sands train, as well as his training sessions in nearby Victoria Park. When Dave Sands was either working out or running in the park, ‘buses would stop; people would get out of their cars just to watch him run’.[4]

Tom Laming was born in 1919 in Pyrmont and trained as a boxer at Bill McConnell’s gym at nearby Chippendale. Laming had 12 professional fights and went in against Dave Sands twice, being knocked out on both occasions.[5] Laming regarded Sands as a close friend, and this was the reason why Sands would train at Laming’s establishment on his visits to Sydney. Laming was an active and vocal member of the local branch of the Labor Party, and he raised funds for Tranby.[6]

Dave Sands died in a car accident in August 1952. An estimated 15,000 people attended his funeral in Newcastle. The mile-long procession featured a unique tribute from Laming and the people of Glebe: ‘A truck carrying a four-foot square floral wreath, on which was mounted a miniature boxing ring’.[7] After Sands’ death, Tom Laming arranged for a plaque in memory of the great fighter to be placed in the garden plot next to the Jubilee Fountain, on the corner of Glebe Point Road and Broadway. Local member Daniel Minogue unveiled the plaque on 13 September 1952.[8] Laming also helped arrange a benefit carnival for Sands’ family Harold Park in October, which was raided by the police.[9] Tom Laming died in 1981 and his gym closed in 1988.

In 1998, sculptor Ian Lisser-Sproule was commissioned to create a public artwork outside Laming’s establishment at 49 Glebe Point Road. ‘Boxing Gloves’ was officially opened on 13 February 2000. The artwork was composed of bronze-cast boxing gloves placed inside a metal box set into the pavement, covered with glass. On the wall nearby, a plaque celebrated boxing as an ‘important part of Glebe’s working-class identity and pride.’[10] This sculpture is one of the reasons Laming’s gym is more closely associated with the Glebe Point Road address, rather than his Westmoreland Lane gymnasium.

Laming’s wife Joan attended the unveiling of the Dave Sands plaque in 1952, and she was again present 56 years later with former great Aboriginal boxer George Bracken when the memorial plaque was rededicated on 19 December 2006.[11] The event was attended by over 120 former fighters, fans, and Aboriginal community members. At the launch, George Bracken said that:

The sport gave Aboriginals opportunities to travel and improve their financial status and the humility shown by Dave and his brothers was an inspiration to my career.

Led by Dave Sands and Ron Richards, Aboriginal boxers were the early heroes and warriors who led us off the missions with their successes.  Dave helped us believe that we could compete[12]

Dave Sands was further recognised in the locality when a laneway at the rear of 17–31 Phillip Street was named in his honour. Dave Sands Lane was officially opened by Robyn Kemmis, former Deputy Lord Mayor, on 26 July 2015.[13]

Worimi man Professor John Maynard is a leading historian based with the Purai Global Indigenous History Centre at the University of Newcastle.