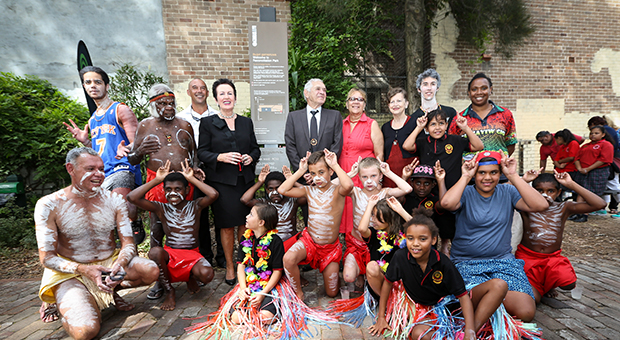 Reconciliation is the symbolic recognition of the honoured place of the First Australians in our society. The movement for reconciliation between Aboriginal and Torres Strait Islander peoples and the wider Australian community began in the early 1990s. It led to the naming of this park in Redfern.

In the early 1980s, South Sydney Council began work to create a park and playground on vacant land bounded by George, James and William streets in Redfern. It included a community mural painted by the Public Art Squad on the wall of an adjoining terrace on George Street. The mural titled ‘Think Globally Act Locally’ jointly won the Sir John Sulman Prize for art in 1985. In 1997 the park was upgraded and named Reconciliation Park in recognition of the special place and culture of Aboriginal and Torres Strait Islander peoples in Australia. The park was recently upgraded in 2015.

Signs in the City of Sydney’s parks will now welcome people with the words bujari gamarruwa, which means ‘good day’ in the language of the Gadigal. The first sign was unveiled on 10 March 2016, at Reconciliation Park, Redfern, with a ceremony that included the Lord Mayor, local elders, chief executive of the Metropolitan Local Aboriginal Lands Council Nathan Moran, local schoolchildren and community members.

The Gadigal words bujari gamarruwa were sourced from University of Sydney Professor Jakelin Troy’s The Sydney Language – the most comprehensive Gadigal word list published and accepted by Aboriginal and Torres Strait Islander communities.

Hear the pronunciation of bujari gamarruwa

Find out more about the Aboriginal language of Sydney.