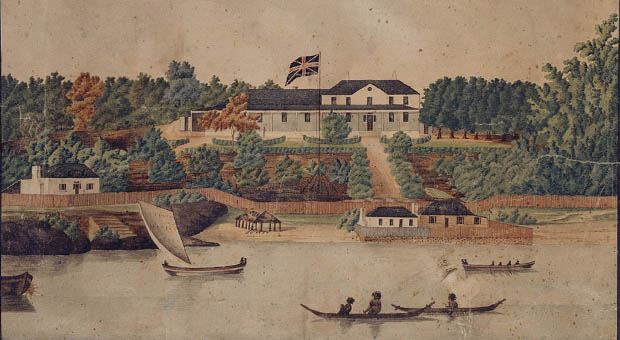 Watercolour by John Eyre showing the gardens of First Government House in c1807; this was where Arabanoo was buried in 1789 (image courtesy Mitchell Library, State Library of NSW – SV/31)

Arabanoo (c1760-89) was the first of Governor Arthur Phillip’s protégés. Phillip’s plan was to learn the language and customs of the local people. He believed that if some of them could be trained in English, they could be used to act as intermediaries.

Phillip ordered Arabanoo’s capture at Manly in December 1788. Arabanoo became friendly with the colonists who called him Manly. Arabanoo dressed in European clothes and dined regularly with Phillip, providing the first real information about Aboriginal society and culture.

Arabanoo was horrified at the sight of a public flogging and appalled by the decaying bodies of Aboriginal people who died from the smallpox epidemic that decimated the local people soon after the arrival of the First Fleet. He nursed two sick children named Nabaree and Abaroo back to good health, before he became victim himself of the disease and died on 18 May 1789. Arabanoo was buried in the Governor’s garden, on the site of today’s Museum of Sydney.

Captain Watkin Tench noted Arabanoo’s ‘countenance was thoughtful but not animated, his fidelity and gratitude, particularly to his friend the Governor were constant and understanding’.