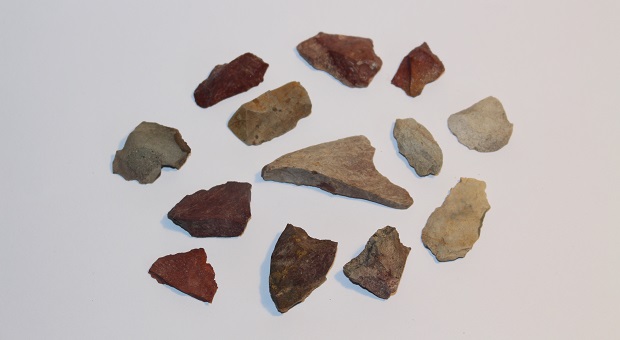 In 2003, archaeologists discovered a large Aboriginal campsite in the western part of central Sydney. It was named the KENS Site after the surrounding streets (Kent, Erskine, Napoleon and Sussex). The earlier building had been demolished and archaeologists were looking for colonial remains, when they found buried soil that appeared to have survived from before the arrival of Europeans. Archaeologists and members of the Metropolitan Local Aboriginal Land Council dug into this soil and found that it contained a considerable number of Aboriginal stone artefacts. As a result, a substantial excavation took place to learn as much as possible about the Aboriginal use of the site before the area was redeveloped. Around 1,000 Aboriginal stone artefacts were found.

The artefacts found at the site included everything from waste material to finished implements, so we know that Aboriginal people made and used stone tools at this campsite. The tools included a number of ‘backed artefacts’. A backed artefact is so-called because the side opposite its sharp cutting edge has been blunted or ‘backed’ to allow it to be hafted or perhaps even held. Studies have shown that backed artefacts had many uses including cutting, incising and drilling.

The number of people camped there, how often and for how long is not clear. The KENS Site is located on a flat area about half way up the eastern side of Cockle Bay (Darling Harbour), so Aboriginal people would have had access to fish and shellfish, as well as land animals in the forests around the site. Unfortunately, traces of their food, their wooden tools and other activities had been decomposed by acids in the sandy soils of the site long before it was discovered by archaeologists.

We do not know exactly how old the site is, but the type of stone tools and the way they were produced suggests that it was most likely within the last 3,000 years. Aboriginal people continued to camp at the site after the arrival of Europeans. Two artefacts were fashioned from European bottle glass using the same techniques as for stone tool making, showing us that Aboriginal people were adapting traditional practices to new circumstances after the arrival of Europeans.