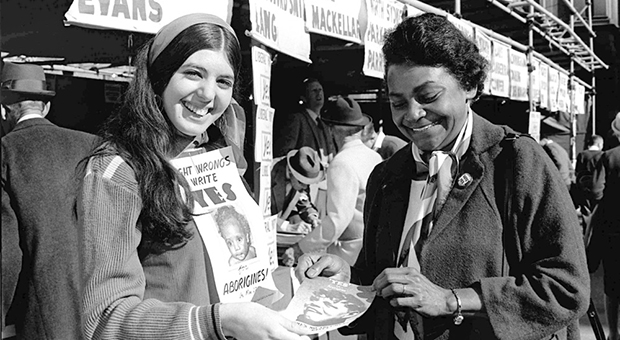 Activist Faith Bandler at Sydney Town Hall where people were voting on the referendum in 1967. (Photograph by George Lipman, courtesy Fairfax Media)

When Aboriginal-Australian Fellowship (AAF) activists filled Sydney Town Hall for their first meeting on 29 April 1957, they set off a series of actions that led to one of Australia’s most influential events: the 1967 Referendum.

Faith Bandler and Pearl Gibbs, campaigners with big ambitions for racial equality and justice, set up the AAF in 1956 to campaign around pay equality, recognition of land rights, racial prejudice, and citizenship rights.[1] Joining them was Jessie Street, who had been living in London where she had advocated for the plight of Aboriginal people to be presented to the United Nations.[2] On her return home to Sydney, Jessie united with Faith and Pearl and became a patron of the AAF.

The AAF called for a referendum to change the Australian Constitution to include Aboriginal peoples in the census and allow the federal government to make laws for them, on equal grounds with the rest of Australia’s citizens. The AAF united Indigenous and non-Indigenous people to lead the campaign.

At the AAF’s inaugural meeting at Sydney Town Hall In 1957, Jessie placed a draft petition with constitutional amendments into Faith Bandler’s hands and told her to ‘go and get that referendum.’[3] Faith, Pearl and Jessie worked alongside Shirley Andrews from the Council of Aboriginal Rights (Victoria) to achieve a significant result of 100,000 signatures on the petition. Leslie Haylen, from the Labor Party, presented this first petition to the House of Representatives in May 1957.

Although there were several more political steps leading up to the Federal Parliament voting in favour of a referendum 10 years later, it was Jessie’s suggested amendments to the constitution that were eventually adopted.[4]

In the decade from 1957, Aboriginal protest events attracted increasing media attention as public interest turned towards the injustices faced by First Nations people.[5]

Faith became the spokesperson on the referendum for the Federal Council for the Advancement of Aborigines and Torres Strait Islanders (FCAATSI). This organisation took up the charge on campaigns for equal pay, land rights and ending discrimination.[6]

Protests and rallies were held across Sydney in the lead up to and after Prime Minister Harold Holt’s announcement on 23 February 1967 that Australia would have a referendum for amendments to sections 51 (clause xxvi) and 127 of the Australian Constitution.[7] This included a rally at Wynyard Park two days before the referendum to raise awareness of voting ‘yes’.

For Ray Peckham, ‘Constitutional discrimination is a blot on our country and must be removed as a first step.’ [8]

On 27 May 1967, voting booths were erected across Sydney, including at Sydney Town Hall, where Faith, Pearl and Jessie had made the first move 10 years’ earlier.

Citizens cast their votes to ‘remove references in the Australian Constitution discriminating against First Australians, allowing Australian parliament to make laws in relation to First Australians and include First Australians in the national census.’[9] The result was an overwhelming ‘yes’ vote, with 90.77% of voters in favour of the ‘Constitution Alteration (Aboriginals) 1967’. It was the highest ‘yes’ vote ever recorded in a federal referendum and was a cause to celebrate.

The 1967 Referendum is regarded as a catalyst for mobilising the federal government on Indigenous affairs.[10] It was a positive step in the ability to address the impacts on Aboriginal and Torres Strait islander peoples created by discriminatory laws and policies.

Great strides have been made in recognition and reconciliation since, though we still have a long way to go. The AAF and FCAATSI no longer exist, but the fight for recognition continues, as does the call for the federal government to introduce legislation to support a referendum for a constitutionally-enshrined voice to parliament.[11]

Danika Davis is an Aboriginal writer based on Ngunnawal Country (Canberra). She directs Neat Copy; a copywriting and editing business specialising in content for First Nations organisations and audiences.

[9] ‘Statement showing result of Referendum upon proposed law to alter the Constitution with respect to Aboriginals’, Commonwealth of Australia Gazette, 26 June 1967, Issue No. 55, p. 3403, https://trove.nla.gov.au/newspaper/article/241040752