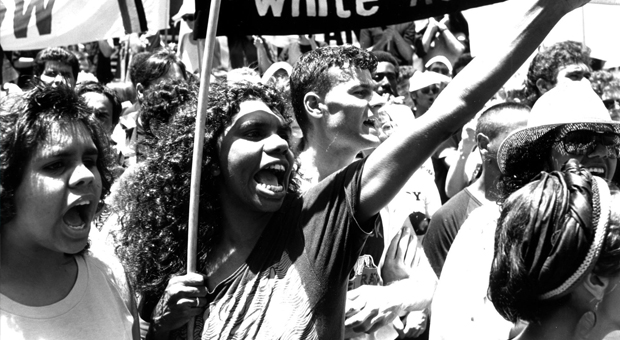 Along with the protection of children, and the right to vote and be counted, Aboriginal people also mobilised politically around land rights throughout the 20th century.

Sydney had seen protests about Aboriginal land ownership from the early 20th century, but activism here grew in response to the national land rights movement which came to a head in the 1970s over land claims by the Gurindji and Yirrikala peoples in the Northern Territory. In Sydney the movement was led by a coalition of Aboriginal activists, student radicals, humanists, and radical church leaders, and land rights protest marches were organised by the Black Moratorium Committee based at Tranby in Glebe.

Sydney Town Hall was a focus for Aboriginal activism as its Lower Town Hall was the site for rallies, public talks and fund raising concerts in the early 1970s and 80s. Land rights were also a key concern for the protests around the Bicentennial celebrations, which included a march from Redfern Oval into the city on 26 January 1988.