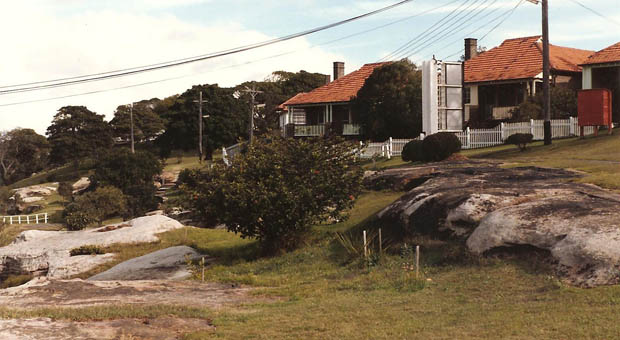 Goat Island is a small rocky landmass in the waters of Sydney Harbour. It was inhabited by early colonial Aboriginal identity Bennelong and his wife Barangaroo, and was said to have belonged to Bennelong’s father. It was also used by Aboriginal people long before that time, as two Aboriginal sites on the island demonstrate.

A midden was found during the preparation of a management plan for the island in 1985. Middens are mounds of discarded food waste (shellfish and the bones of fish and land animals) that have been left by Aboriginal people camping near the coast. They may be the result of a single meal or the continued used of a camp over a long period of time. They can also contain the remains of cooking fires, stone, bone and shell tools, and sometimes human burials. They are important sources of information for archaeologists because the lime-rich shells help preserve bones that would otherwise quickly disintegrate in the soil. The Goat Island midden is a small, thin shell layer that has been very disturbed by the surrounding landscaped gardens. The fragmented shells in the midden consist mainly of Sydney cockles, with some Sydney rock oysters and hairy mussels as well.

The second site recorded on Goat Island is a sandstone overhang (known as a rockshelter). A rockshelter is formed when an outcrop of sandstone weathers to form an overhang. Aboriginal people used these overhangs to gain shelter from the elements and they often produced art on the walls and ceilings. The rockshelter was located in 1990 by an amateur archaeologist, and is big enough to have been lived in. The shelter does not contain art, but has a midden in it that consists mainly of Sydney rock oyster shells.

Neither of these sites have been excavated by archaeologists, so we do not know how old they are, and there may be animal bones and artefacts that have not yet been recorded. But the shells at both sites show us that Aboriginal people were gathering foods that were available around the rocky shores of the island. There must also have been freshwater available on the island for Aboriginal people to have lived there. This was probably found in rock pools or natural springs in the sandstone.

B Rich, 1985. Goat Island Archaeological Survey and Assessment of Aboriginal Sites (Report to Maritime Services Board of NSW).