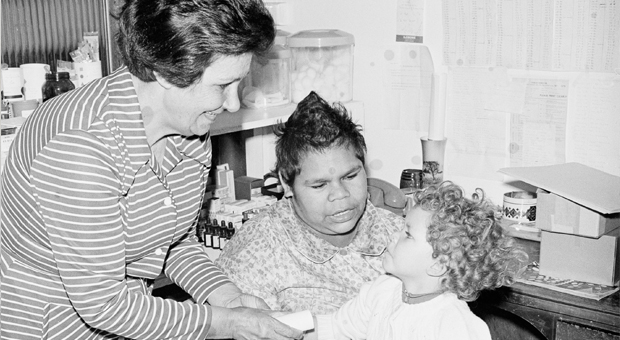 Clients at the Aboriginal Medical Service in 1974 (photograph courtesy National Archives of Australia - Series A8739, Item A2/8/74/23)

The Aboriginal Medical Service (AMS) was set up in July 1971 to provide free medical support to Aboriginal people living in Sydney. It was the first Aboriginal community-run medical service in Australia, and had a holistic approach to health care from the outset.

Its formation was a response to health issues among Aboriginal people newly migrated from regional NSW, many of whom were living in overcrowded conditions and experienced poor nutrition. There was no universal health care scheme at this time, and some were reluctant to access mainstream medical services.

Foundation members included non-Aboriginal doctors who volunteered their services. Prominent community activists were employed as field officers including Mum Shirl, who was the first Welfare Officer.

In 1977, the AMS moved to premises behind St Vincent’s Catholic Church. The Sisters of Mercy later presented the deeds of this property in a symbolic gesture of solidarity. A new building for the AMS designed by the Merrima Design Unit at the Government Architect’s Office was built here in 2004.