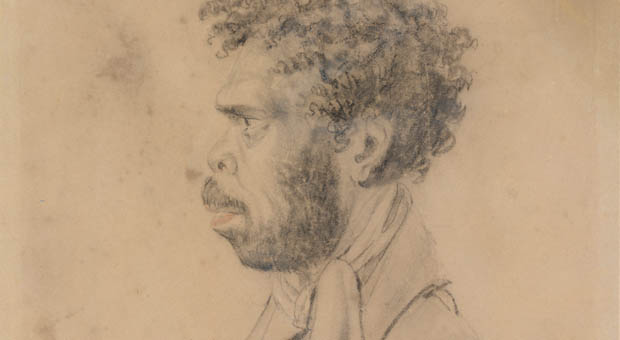 Ricketty Dick (c1795-1863) was an Aboriginal man who lived in Sydney in the early to mid-19th century. He was also known as Warrah Warrah or William (Bill) Warrah, Worrell or Worrall.

Ricketty Dick was a familiar and well-liked personality around Sydney in the 19th century. He lived at a range of Aboriginal camps in Sydney, including those at The Domain, Rose Bay and Woolloomooloo. As one of the elders in these camps, Ricketty Dick was sometimes described as the ‘King of the Woolloomooloo Tribe’ and the ‘Chief of the Rose Bay Tribe’.

He was given the name Ricketty Dick ‘in consequence of the way in which he walked’. Other commentators recorded that he was a ‘cripple’ and that he had some form of paralysis that affected his legs.

He was born in Sydney in c1795. His father was from Five Islands near Wollongong and his mother was from the Botany area. He was related to Cora Gooseberry, Bungaree‘s wife.

In 1854, Ricketty Dick was noted as a ‘denizen of Sydney’. By this time, he had taken up occupation of a ‘gunyah’ at Rose Bay. He camped on the side of the Old South Head Road and was ‘daily seen by the visitors to South Head’. One source records that he lived here with his wife, referred to as ‘Mrs Snowball’. Another source records that he was addicted to alcohol and that he begged money from passers-by.

Ricketty Dick had camped at this spot on Old South Head Road from at least 1852. The exact location of this camping spot has not been pin pointed but it was on part of Daniel Cooper’s Point Piper Estate, and was probably at the headwaters of Rose Bay which was then swamps. In 1910 the site of the ‘gunyah’ was recorded as being ‘about where the golf links are now’.

George Rawlingson was a ‘contractor, in charge of Sir Daniel Cooper’s property’, known as the Point Piper Estate. W C Wentworth, who lived nearby at Vaucluse House until 1854, paid George Rawlingson a weekly wage to look after Ricketty Dick. It appears that Ricketty Dick earlier spent time at the Benevolent Asylum.

Bill Worrell was recorded on the 1857 Blanket list for Sydney. A year later, Geroge Thornton in a letter to the Colonial Secretary declared that there were only two Sydney Aboriginal people left, so all of the blankets were not needed. He wrote ‘I can assure you that the number of blacks now belonging to the Sydney district are reduced to two – vis ‘Wingle’ and ‘Bill Worrell’.

Ricketty Dick spent his final days around Rose Bay and died in the winter of 1863.

A coin with Ricketty Dick’s profile was struck after his death.