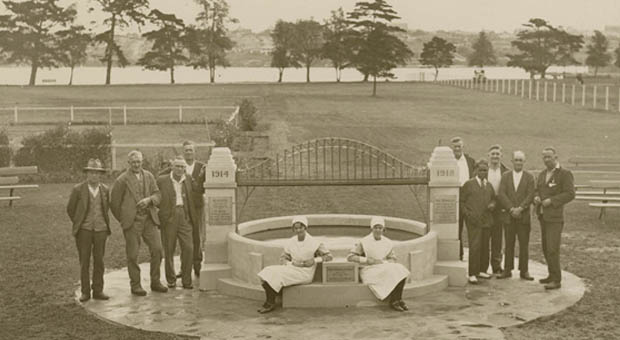 Douglas Grant, nurses and ex-servicemen gather around the war memorial built by Grant at Callan Park, which featured an ornamental pond and a replica of the Sydney Harbour Bridge, 1931 (Photograph courtesy State Library of NSW, Digital Order number a368022)

Douglas Grant was a natural born leader, fiercely intelligent artist and poetry enthusiast who served as a Private in the 13th Battalion of the Australian Imperial Force before he was captured as a Prisoner of War in 1917. As a full-blooded Aboriginal man with a Scottish accent and a talent for the bagpipes, Grant was a popular personality in the media. However, after his experience as Australia’s only known Aboriginal POW during World War I, he became a strong advocate for veterans and challenged the government’s treatment of Aboriginal people.

Originally named Poppin Jerri, Grant suffered personal tragedy at an early age when his parents and much of his Aboriginal community were killed, apparently in a tribal fight, in the Bellenden Ker Ranges, Queensland in 1887. The infant was rescued by the Scottish taxidermist Robert Grant, who took him to his parents in Lithgow, NSW and later adopted him, renaming him Douglas. Grant lived on Albion Street in the Sydney suburb of Annandale and attended Scots College in Bellevue Hill. He developed a keen interest in the works of William Shakespeare and displayed an aptitude for drawing, winning first prize in the Queen’s Diamond Jubilee exhibition in 1897.

For 10 years, Grant was a draughtsman at Mort’s Dock in Balmain before he worked as a woolclasser at Belltrees Station near Scone, NSW. On 13 January 1916 at Scone, he enlisted as a private in the 34th Battalion of the Australian Imperial Force. When his unit was about to depart Sydney four months later, however, he was prevented from leaving port by the Aboriginal Protection Board. The Sydney Morning Herald reported:

…at the last moment a Government official discovered a regulation preventing an aboriginal from leaving the country, and, much to his disgust and to that of his comrades – for he was one of the most popular fellows in the company – Grant had to stay behind.…

Grant re-enlisted and embarked with the 13th Battalion on HMAT Wiltshire bound for Plymouth, United Kingdom on 22 August 1916. As snow fell to the ground on 11 April 1917, Grant and his battalion faced a ‘tornado of lead’ as heavy shell and machine gun fire greeted Australian troops during the First Battle of Bullecourt in France. By the end of the battle, they suffered over 3,300 casualties and 1,170 Australians were taken prisoner, including Grant who was captured at Riencourt.

During the almost two years he spent confined at German POW camps in Dülmen, Wittenberg and Wünsdorf, Grant became an object of fascination to German doctors, scientists and anthropologists. A newspaper article later claimed he was mistaken for a Gurkha soldier and he was eventually given the responsibility of supervising the distribution of rations to Indian prisoners, as president of the British Help Committee.

In March 1918, the Sydney Mail published a photograph of Grant at Wittenberg Camp and a letter he wrote to his father stating he was ‘well and comfortable as circumstances will permit…The Australian Red Cross sends me three packets of groceries a fortnight, which contain oatmeal, rice, bacon, cheese, butter, cocoa, coffee, tea, cigarettes, tobacco, and other articles….’ In a letter two months later, he requested works by poets Henry Lawson and Adam Lindsay Gordon so that he could ‘pass away a few leisure moments which are generally filled with that longing for Home Sweet Home far across the sea’.

After the war, Grant arrived in England on 30 December 1918 and was finally repatriated to Australia, arriving home on 12 June 1919. He was discharged on 9 July, receiving the customary British War and Victory Medals for his service. After the war, he returned briefly to his previous job at Mort’s Dock before moving back to Lithgow to live with his family, where he worked at the Small Arms factory and ran a local radio station highlighting the concerns of returned servicemen.

The first ripples of Grant’s discontent appeared publicly in February 1929, when the Sunday Pictorial printed an article by Grant addressing the 1928 Coniston massacre in Northern Territory. He stated, ‘The Government has to awaken, and take measures to ensure the lives of the remnants of Australia’s original inhabitants.’ In addition to these protestations, in the July 1929 issue of Reveille published by the Returned Services League of Australia he wrote of the government’s ‘broken pledge’ to the returned soldier:

…who gave his all in the honouring of the pledges he made, when he carried the honour, integrity and fair name of Australia, unblemished and untarnished, through four years of horror, blood and unspeakable hell.

During the 1930s, Grant’s passion for this recognition and perhaps discontent at the lack of it, was made tangible for all to see in an artwork he created at Lilyfield’s Callan Park Mental Hospital. He worked as a clerk at the hospital and also lived there as a patient reportedly ‘suffering from a bad attack of nerves’. He allegedly nicknamed himself and his fellow traumatised returned soldiers in Repatriation Ward B ‘the Lost Legion’. He designed and helped construct, along with his fellow patients, a scale model of the Sydney Harbour Bridge above a circular pond dedicating it ‘in proud memory of those who made the great sacrifice’.

During his later years, Grant was found living in the Salvation Army’s old men’s quarters in Dee Why and from 1950 at La Perouse in the War Veterans’ Home. In one interview published in The Mail shortly after his foster-brother Henry’s death, 60-year-old Grant reportedly appears ‘stooped, grey-haired’ with ‘melancholy in his deep-set eyes’. In this interview he relayed his hopes for the future of Aboriginal people, that they ‘be given full rights of citizenship and full education’:

Australia is the aboriginal’s by birth – the Australian’s by adoption…Surely after 150 years the Government can see its way clear to uplift and emancipate the Australian aboriginal.

Grant died of a subarachnoid haemorrhage at Prince Henry Hospital, Little Bay on 4 December 1951 and was buried at Botany cemetery.