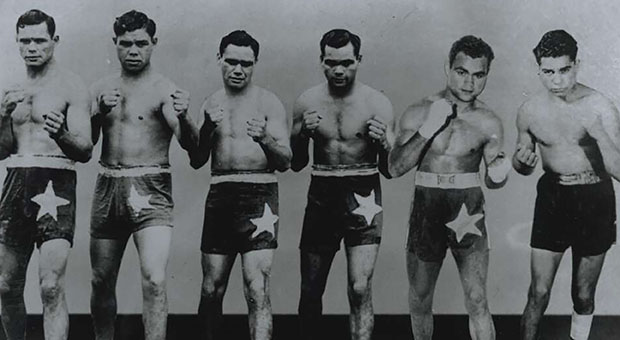 Dave Sands Lane is a small lane in Glebe, which runs behind Phillip Street, and between Denman Lane and Mitchell Lane West. It was named in 2014 in honour of Dave Sands, a famous Aboriginal boxer, who lived and trained in Glebe.

Born David Ritchie on 24 February 1926 at Burnt Bridge, near Kempsey in northern NSW, he was one of eight children, all proud members of the Dhungutti people. Their father, George Ritchie, was a rodeo-rider and timber-cutter of mixed Aboriginal and European descent. Their mother, Mabel Russell, was an Aboriginal woman whose uncle, Bailey Russell was a noted bare-knuckle fighter. Five of Dave’s brothers were also professional boxers, and they all fought under the name Sands, after ‘Snowy’ Sands, a local railway guard and boxing fan. Known as ‘The Fighting Sands’, they wore green satin shorts with a white star.

Dave Sands held the Australian middle, light heavyweight and heavyweight titles over his eleven-year career. He also won the Commonwealth middleweight title. Dave was the first Australian boxer to achieve success overseas. He won the British Empire middleweight title in September 1949, and people referred to him as ‘the second fire of London’. He also fought in America. When in Sydney, Sands trained at Tom Laming’s Golden Gloves gym at Westmoreland Lane. Large crowds of fans watched his training sessions at the gym and in nearby Victoria Park.

Tragically, Sands was killed in a truck accident near Dungog in August 1952, aged only 26. He was inducted into the International Boxing Hall of Fame in 1998. A plaque commemorating Dave Sands’ life and achievements stands on the corner of Glebe Point Road and Parramatta Road, Glebe.