Aboriginal arts and culture in Sydney 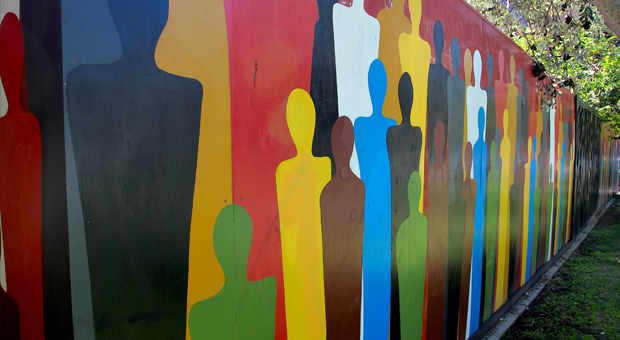 ‘United we stand divided we fail the future’, an artwork by Bronwyn Bancroft and Dale Jones Evans installed in Hugo Street Reserve in 2004 (photography Barbara McGrady, courtesy City of Sydney)

Apart from rock paintings and engravings, there is little evidence of the artistic and cultural activities of Aboriginal people prior to the white invasion. However, there are several accounts – the journals of officials and others in the First Fleet – that document the cultural traditions of Sydney’s Aboriginal people at the time of European settlement.

It is clear that singing and dancing were a large part of daily life for Aboriginal people in Port Jackson. Some observers like Governor John Hunter claimed that Aboriginal women would sing all day, particularly while fishing, keeping time with a song while they paddled. The songs and dances performed at corroborees told stories of hunting, fighting and male / female relationships. Corroborees, termed ‘bush operas’ in modern days, took place at night at Bennelong Point and The Domain, where non-sacred songs and dances were performed.

Traditional Aboriginal culture in the city has been almost completely destroyed since European occupation, but it has been replaced with new, diverse and protected forms of Aboriginal art, creating a distinct urban Aboriginal culture. And while the methods of creating such art have changed over time, the enthusiasm to create, maintain and protect new artwork has grown. In recent times, the celebration of Aboriginal culture within Sydney has been a strong element in the maintenance of an Aboriginal presence in the city. This celebration has incorporated both traditional and contemporary forms of dance, song, storytelling, literature, multimedia and visual arts.

Aboriginal playwright, screenwriter and director Bob Merritt believed in a resurgence of Aboriginal culture and in 1984 set up the Eora Centre for the visual and performing arts in Chippendale. The objective of the centre was to offer young Aboriginal people a comprehensive education in the traditional arts.

More recently, the celebration of Aboriginal arts and culture within Sydney has taken on a higher profile, aided by a growing interest by non-Aboriginal people in celebrating the oldest surviving culture in the world.

Aboriginal art and culture are accessible throughout the year in Sydney, but there are also significant and specific annual events. NAIDOC Week is a national celebration when Aboriginal and Torres Strait Islander people share their culture with families and friends, and in particular with schools, in an effort to educate and entertain the broader population.

Another annual cultural celebration is Yabun held on 26 January at Victoria Park. Yabun has been showcasing Aboriginal and Torres Strait Islander culture since 2002. Before Yabun, the ‘Survival’ concert was the annual cultural festival held in Sydney on 26 January. Survival was originally at La Perouse because of its historical significance but from 1998 was at Waverley Oval. The concert celebrated the survival of Aboriginal and Torres Strait Islander society and culture across all art forms.

In 1997, the City of Sydney played host to the first of the four Olympic Arts Festivals held in the lead-up to the Sydney 2000 Olympic Games. The Festival of the Dreaming was dedicated to the presentation and promotion of Aboriginal and Torres Strait Islander culture, with some international involvement, and events were held at the State Library of NSW, the Museum of Contemporary Art, the Sydney Opera House and The Wharf at Walsh Bay.

Organisations like the National Aboriginal and Islander Skills Development Association (NAISDA) and the Bangarra Dance Theatre, have continued to provide training and professional performances of Aboriginal and Torres Strait Islander peoples’ stories from around the country to audiences in Sydney, interstate and overseas.

Bangarra’s performance successes in Sydney have included ‘Praying Mantis Dreaming’ (1992), ‘Ninni’ (1994), ‘Ochres’ (1995), ‘Dance Clan’ (in association with City of Sydney in 1998 and 1999) and ‘Rites’ in 2000. One of the highlights of Bangarra’s repertoire was the performance of the “Awakening Ceremony’ which opened the Festival of the Dreaming on the steps of the Sydney Opera House in 1997. As part of this festival, Bangarra also performed ‘Fish’ at the Drama Theatre, Sydney Opera House.

The appropriation of Aboriginal art work has been an ongoing political and cultural issue. It is well-known that non-Aboriginal artists like Martin Boyd produced ‘Aboriginal-inspired’ pieces of art in the 1960s with his kitsch pottery including wall pieces and ceramic boomerang cocktail dishes. Studio Anna in Marrickville also appropriated Aboriginal art and produced plates and earthenware with pseudo-Aboriginal designs. These pieces are currently held by the Powerhouse Museum.

Since the establishment of Boomalli Aboriginal Artists Co-operative in 1987, there has been no shortage of Aboriginal expression through the visual arts in Sydney. Boomalli, originally in Chippendale, and now in Leichhardt, has enabled Aboriginal art to contribute to the cultural activities of the city. Some of the exhibitions that have been held in the past decade within the city’s boundaries include: ‘Blak on Trak’ (1997), ‘Chip on the Shoulder’ (1996), and ‘Black Boys’ (1996).

Yiribana Gallery at the Art Gallery of NSW is the home of a uniquely important collection of Aboriginal and Torres Strait Islander art. Opened in 1994, the name Yiribana acknowledges the Gadigal people and their descendants and simply means ‘this way’. The majority of the artworks in the collection have been produced since 1945.

The Djamu Gallery opened at the former Sydney Customs House at Circular Quay in 1998 and closed in 2000. ‘Djamu’ (pronounced jar-moo) is an Eora word meaning ‘I am here’. The Djamu Gallery was a multi-dimensional experience of art, culture and history. It was a meeting place for ideas, visions and artistic expression. A venture of the Australian Museum, it showcased rarely seen collections, as well as artworks and cultural objects from Aboriginal and Torres Strait Islander communities and keeping places. Djamu’s exhibitions (1999-2000) included ‘Mapping our Countries’ and ‘Menthen… Queue Here’.

From May 2000 through to April 2007, Bayagul: contemporary Indigenous communication was a permanent gallery housed at the Powerhouse Museum showcasing contemporary Aboriginal and Torres Strait Islander works in the areas of tourism, fashion, performing arts, and media.

The Museum of Sydney has also provided a venue for the exhibition and promotion of Aboriginal arts and culture. It offers a number of exhibitions and public programs specifically related to local Aboriginal society and culture. Opened in 1997, the gallery Gadigal Place [http://www.hht.net.au/whats_on/exhibitions/exhibitions/gadigal_place] honours the Gadigal people, the clan on whose land the museum now stands. Another tribute to the local people of Sydney is the mural ‘Burraburragal: People of the Harbour’, designed and painted by visual arts students in consultation with Sydney Elders. The mural aims to evoke the heart of Aboriginal life around Sydney Harbour.

Wuganmagulya (Farm Cove) is an installation honouring the original Yura (Eora) clans of the site and those Aboriginal people who held ceremonies here. Incorporating such elements as stained concrete, terrazzo and engravings, the work is integrated into the harbourside pathway at Farm Cove and acknowledges the Aboriginal life and natural elements of the surrounding environment by the use of colour and texture. It was created by Brenda Croft, a Gurindji woman, who was a founding member of Bommalli Aboriginal Artists Co-operative. Wuganmagulya (Farm Cove) is part of the Sydney Sculpture Walk commissioned by the City of Sydney.

Music hasn’t had as high a profile as the visual arts in the city, but in the 1990s and early 2000s, it was common to see Aboriginal bands like Tiddas or soloists like Jimmy Little playing in local pubs and even around the Sydney Opera House on Sunday afternoons. These gigs followed in the footsteps of people like Mac Silva, Silver Linings, Black Lace and Col Hardy who all began their careers at the Foundation of Aboriginal Affairs in George Street in the 1960s.

In 1994 an anti-racism campaign was launched by the NSW Local Aboriginal Land Council at Sydney Opera House; its theme song ‘Melting Pot’ was performed by Brenda Webb.

Since the early 1990s, Gadigal Information Services have been active in broadcasting Aboriginal and Torres Strait Islander peoples’ music on Koori Radio and organising Klub Kooris in city venues. In 1999, Gadigal Information Services released the first compilation of Sydney-based Aboriginal musicians on a CD titled ‘Yabun’, a Sydney language word meaning ‘music made by singing or beating time’.

The written word by Aboriginal people has been slower than other art forms in establishing itself in the culture of the city. This is mainly because literature is a relatively new medium for Aboriginal people, but also because for a long time non-Aboriginal people have been writing for and about us.Aboriginal writers played a role in the Spring Writing Festival held at the Writers Centre in Rozelle in the early 2000s, and also feature in the Sydney Writers Festival in more recent times. Authors who have been involved in these festivals have included Cathy Craigie, Gerry Bostock, Philip McLaren, Burraga Gutya, Ruby Langford-Ginibi, Anita Heiss, Norm Newlin, and Connie McDonald.