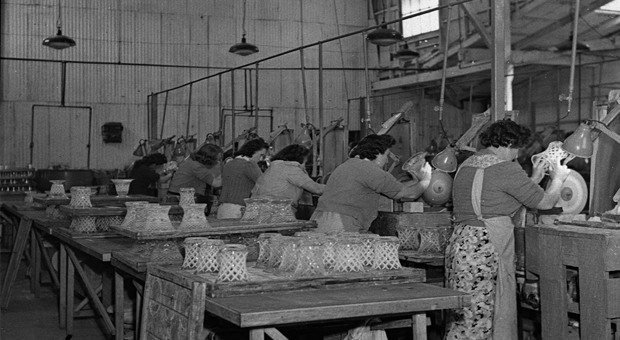 Female employees at the Australian Glass Manufacturers in Waterloo in 1947 (photograph courtesy Mitchell Library, State Library of NSW - Home and Away 24966)

Sydney has long been a magnet for Aboriginal and Torres Strait Islander people seeking work opportunities, shelter and connections with community and family. Many worked in private industry in Sydney’s southern suburbs.

Glass production was one of South Sydney’s main industries in the late 19th century. A number of glassworks were established at Redfern, Alexandria and Waterloo to manufacture bottles for the pharmacy trade; brewers, distillers and winemakers; and domestic use, mainly jars used for preserving and pickling fruit and vegetables.

By the 1920s, Australian Glass Manufacturers (AGM) had a monopoly on glassmaking in Sydney. Crown Crystal Glass Pty Ltd was a subsidiary company of AGM formed in 1926. It produced crystal as well as cut, pressed and blown glassware for industrial and household use, including pyrex. By the late 1930s, the company was producing 9634 different types of glass bottles and containers.