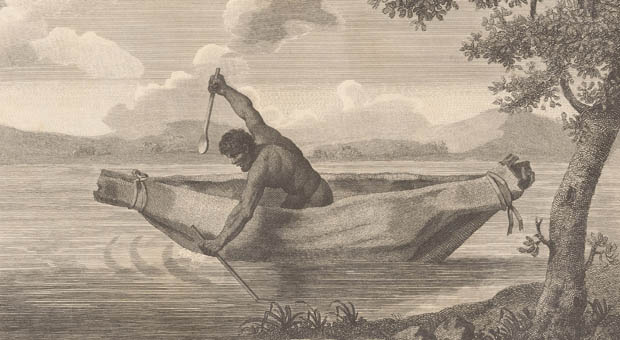 This engraving by James Grant of 'Pimbloy' is believed to be the only known depiction of Pemulwuy (illustration courtesy National Library of Australia, from Grant’s 'The narrative of a voyage of discovery, performed in His Majesty's vessel the Lady Nelson, of sixty tons burthen, with sliding keels, in the years 1800, 1801 and 1802, to New South Wales', 1803 - nla.cat-vn2312357)

Pemulwuy was a courageous resistance fighter who led a guerrilla war against the British settlement at Sydney Cove from 1788 through to 1802. Because of his resistance to the invaders, he became one of the most remembered and written about historical figures in Australian Aboriginal history.

Pemulwuy was a Bidjigal man from the Botany Bay area of Sydney. He saw the damage done to Aboriginal society by the colonisers and was not tempted to befriend them as other Sydney Aboriginal people, including Arabanoo and Bennelong, had done.

In December 1790, Pemulwuy speared a much disliked gamekeeper, a convict named John McIntyre (or McEntire) who was known for killing Aboriginal people. When McIntyre died from his wounds in January the following year, Governor Arthur Phillip retaliated by ordering a punitive expedition. Fifty soldiers and two surgeons headed into the bush where their inept bush skills gave early warning of their presence, and not a single Aboriginal person was captured.

Pemulwuy led many guerrilla conflicts against the settlement from Botany Bay to the Parramatta area and later to Tongabbee (Toongabbie). In a battle at Parramatta in 1797 he was shot and hospitalised but later escaped, to the delight of his community. Wanted dead or alive, Pemulwuy was finally shot dead in 1802 and his head was sent to England. His son Tedbury was taken prisoner in 1805.