Apology to the Stolen Generations 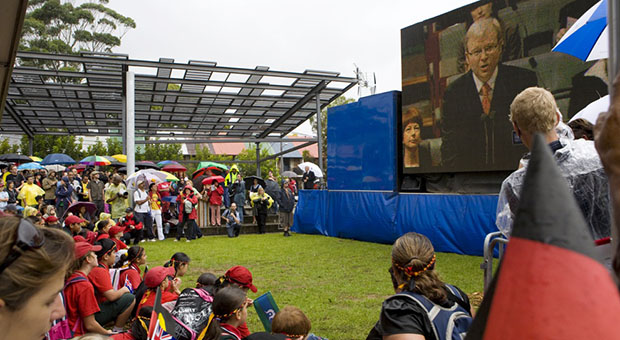 On the day of the apology address to the Stolen Generations, staff from the City’s History Team recorded oral histories and took photographs of members of the celebratory crowd at Redfern Community Centre. This video, which includes the oral history testimony and images, was produced by the City of Sydney’s History Team in 2009.

The National Apology to the Stolen Generations was added to the National Sound and Film Archive’s Sounds of Australia in 2021.

Wendy McDougall, Crowd watching Prime Minister Kevin Rudd on a big screen television in the grounds of the Redfern Community Centre during the live broadcast from Canberra of the Apology to the Stolen Generations, Sydney, 13 February 2008, https://nla.gov.au/nla.obj-137386424

‘We say sorry: 10 years since the apology to the Stolen Generations’, State Library of NSW blog, 13 February 2018, https://www.sl.nsw.gov.au/blogs/we-say-sorry-10-years-apology-stolen-generations