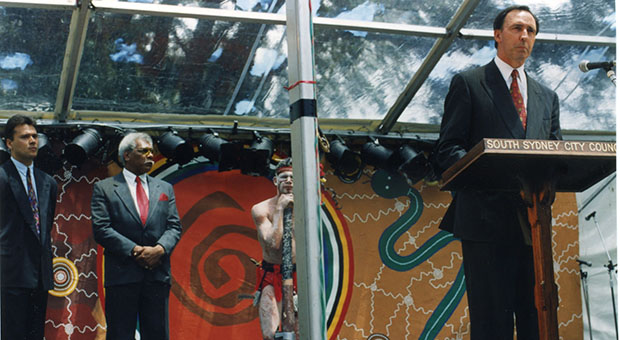 This year marks the 25th anniversary of the Redfern Speech. On 10 December 1992, the launch of the International Year of the Word’s Indigenous People took place in Redfern Park. The most notable event of the day was the speech delivered by former Australian Prime Minister Paul Keating that is now known as the ‘Redfern Speech’.

Paul Keating acknowledged before the predominantly Aboriginal and Torres Strait Islander crowd at Redfern Park the injustices perpetrated by non-Aboriginal Australians. Although not much media attention was given to it at the time, its importance in placing reconciliation on the national agenda has since been recognised.

The day also featured community leader and Elder Solomon Bellear AM. Sol passed away in November 2017, and there will be a State Funeral to honour his legacy at Redfern Oval, next to Redfern Park, on Saturday 9 December 2017. Sol  was a titan of community advocacy and leadership. He saw great value in the Redfern Speech and the importance of acknowledging this pivotal moment in Australian history.

In 2007, ABC Radio National ran a survey to discover the public speeches that Australians regard as unforgettable. Keating’s ‘Redfern Speech’ was voted third: www.abc.net.au/rn/features/speeches

Redfern Park now features a series of artworks including Bibles and Bullets by Fiona Foley that incorporates a quote from the Redfern Speech.