Songs of the Black Arm Band 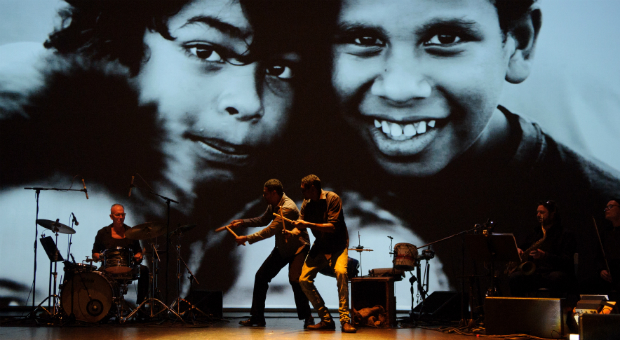 For a decade, Black Arm Band has been sharing the music, songs and stories at the centre of Indigenous life, touching hearts and minds across the country and abroad. A collective of contemporary Aboriginal music pioneers and emerging greats who have inherited their legacy, Black Arm Band celebrates its tenth anniversary with Songs of the Black Arm Band.

This new production brings together songs from its most successful and iconic shows, Murundak, a story of Aboriginal history, resilience and identity, and dirtsong, a theatrical journey through the communities and languages of Australia’s heartland. Charismatic soul singer Emma Donovan leads an 8-strong ensemble of singers and musicians, including virtuoso didgeridoo player Mark Atkins. With an eye to the future, the performance introduces Yirrmal Marika from North-East Arnhem Land; one of an exciting new generation of Aboriginal musicians.

With soaring voices and rich harmonies, the band performs haunting anthems of resilience and hope set against a backdrop of images and text; a potent cinematic vision of the land and its people. Songs of the Black Arm Band is an unforgettable experience and a powerful expression of Aboriginal song, culture, language and spirit.

When: Saturday 22 April 2017, 7.30pm
Where: City Recital Hall
Cost: All tickets are $40
Find out more: https://www.cityrecitalhall.com/events/black-arm-band