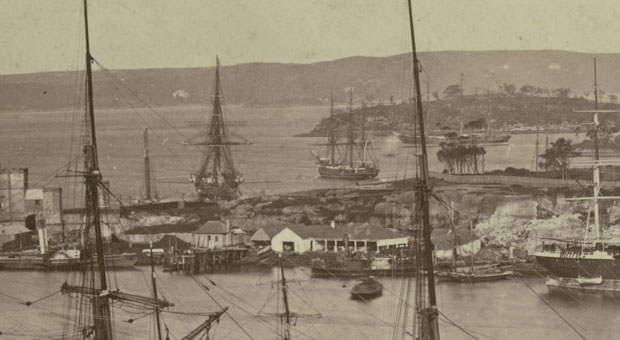 Paul Irish talks about his research on Aboriginal urban communities in Sydney and the origins of the Aborigines Protection Board on Friday 13 September 2013 at History House, 133 Macqurie Street, Sydney at 5-7pm.

In the late 1870s Aboriginal people from south coast NSW and elsewhere re-entered Sydney, colonising the Government Boat Shed at Bennelong Point, and establishing settlements at Double Bay, Botany and other places.

Concern over the presence of Aboriginal people in the city, and the drinking and fighting at Circular Quay, helped to convince the government that a Protection Board should be established. The settlements were duly shut down, and their residents banished to their ‘home districts’, to the newly established reserve at La Perouse or to the Maloga Mission on the Murray.

Or at least that’s how the story goes. The reality was somewhat more complex. Many of the Aboriginal ‘immigrants’ of the 1870s were already linked to Sydney, and some of the settlements they supposedly established had already been in use for decades. The establishment of the Board had more to do with the changing way these settlements and their residents, and ‘Aboriginality’ more generally, were viewed by the government and concerned citizens.

All welcome to come along – wine and snacks will be served. For more information, please contact Lisa Ford (l.ford@unsw.edu.au) or Nancy Cushing (nancy.cushing@newcastle.edu.au).