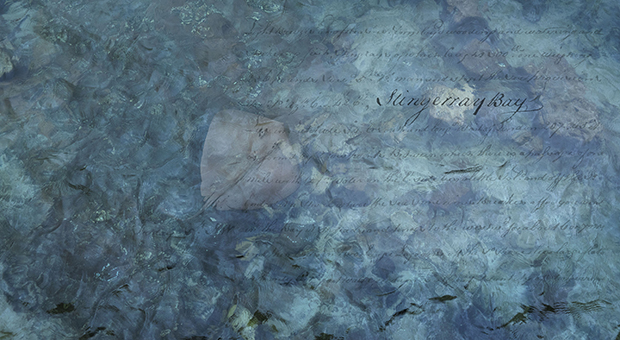 Composite image of the water of Kamay, a page from the journal of Peter Briscoe (one of Joseph Banks' servants) where he recorded the name 'Stingerray Bay', and a pencil sketch of the common stingaree (Urolophus testaceus) by Herman Spöring. Both illustrations were made during the Endeavour's visit in 1770. Courtesy State Library of NSW.

In April 1770, strangers onboard the Endeavour appeared off the shores of Kamay (Botany Bay). This new exhibition at the State Library of NSW explores the eight days that followed and their continuing legacy.

Coinciding with the 250th anniversary of Endeavour visit, the exhibition Eight Days in Kamay features original sketches and journals from the expedition contextualised by Gweagal knowledge. A photographic display of the Day of Mourning protests held by Aboriginal people on the 200th anniversary of the visit and works by contemporary artists Karla Dickens, Daniel Boyd, Michael Cook, Jason Wing and Vincent Namatjira explore the continuing impact of the events of those eight days.

Where: State Library of NSW, Macquarie Street Sydney
When: The exhibition runs from Monday 13 July 2020 to Sunday 28 February 2021

You can also view the online exhibition here: https://www.sl.nsw.gov.au/stories/eight-days-in-kamay