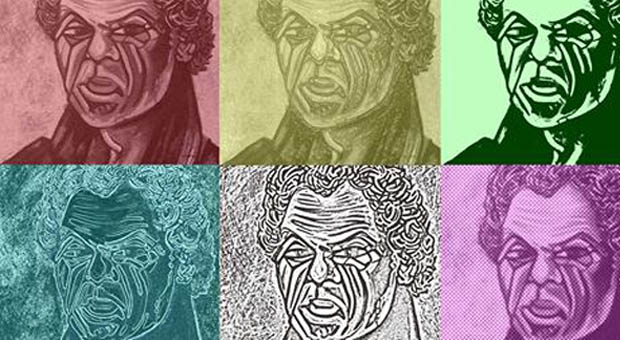 Bungaree’s Farm is a new site specific exhibition of large scale projections and installation work to be held in the T5 – Camouflage Fuel Tank at Georges Heights (Mosman) – the first time this massive industrial space on Sydney Harbour will be used for exhibition purposes.

The exhibition coincides with the 200th anniversary of when Governor Macquarie set aside land for Bungaree at Georges Heights. Bungaree’s Farm will be open to the public for 9 days only (31 January – 8 February 2015).

On 31 January 2015 it will be 200 years since Governor Lachlan Macquarie inaugurated the settlement of ‘friendly’ Aboriginal people on the peninsula of Georges Head and Middle Head overlooking the Heads at the entrance to Port Jackson (Sydney Harbour) in the present suburb of Mosman. It was also the governor’s 54th birthday.

Governor Macquarie selected Boongaree or Bungaree, from Broken Bay north of Sydney, to be his first Aboriginal ‘chief’. He erected huts for Bungaree and his people to ‘Settle and Cultivate’. They were given a fishing boat, clothing, seeds and farming implements.

Macquarie, his wife Elizabeth and a party of ladies and gentlemen travelled six miles down the harbour from Sydney Cove by boat. The visit was recorded in the Sydney Gazette on 4 February 1815.

Macquarie presented Bungaree with a metal gorget or breastplate engraved with the title: ‘Boongaree – Chief of the –Broken Bay Tribe – 1815’.

Bungaree was a key figure in Governor Macquarie’s ‘Experiment towards the Civilization of these Natives’, a plan outlined in a letter sent to Earl Bathurst in 1814. At the end of March 1815, Macquarie advised Bathurst that 16 adult natives had been settled on the farm ‘where I had comfortable Huts built for them, and they and their families appear to be perfectly Contented.’

He thought that ‘by giving them some trifling assistance now and then from Government in the way of Slops [clothes] and Provisions, I doubt not that they will become industrious, and set a good Example to the other Native Tribes residing in the Vicinity of Port Jackson’.

Bungaree was at Georges Head on the morning of Tuesday 5 November 1816, when Governor and Mrs. Macquarie and party went to visit the ‘Native Farm at Georges Head’ in the Government Barge. Macquarie wrote in his Journal: ‘Mrs. Macquarie made Boongary the chief a presentation of a Breeding Sow & 7 Pig[s]—and also a Pair of Muscovy Ducks — together with Suits of Clothes for his Wife and Daughter.’ The expense of £8.10s.0d. for the sow and pigs was charged to the Police Fund administered by D’arcy Wentworth.

Soon after Bungaree, who had circumnavigated Australia with Matthew Flinders on HMS Investigator in 1802-03, seems to have lost interest in being a settler. In December 1817 he volunteered to go to sea with Phillip Parker King in the cutter Mermaid on a survey of north and western Australia. Bungaree was camped at Kirribilli in April 1820 when he met Captain Thaddeus Bellingshausen from the Russian ships Mirny and Vostok.

With great optimism Macquarie resettled Bungaree and his followers before he left NSW after 12 years of public service. On Monday 11 February 1822, he made ‘a Water Excursion’ to Georges Head in the Government Barge with his successor Sir Thomas Brisbane, Mrs. Macquarie and their son Lachlan ‘for the purpose of witnessing our Settling Boongaree and his Tribe of the “Pitt Water” Tribe of Black Natives on their former Farm for the second time at that pretty Place…’.

Governor Macquarie, with his wife and son, boarded the Surry to return to England, finally leaving Port Jackson on Friday 15 February 1822, taking with him a menagerie of animals including kangaroos, black swans, a small emu, cockatoos and several parrots belonging to Lachlan.