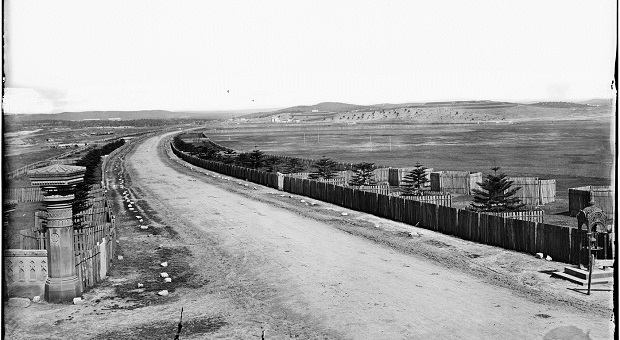 Looking south along Botany Road (now Anzac Parade) across the sandy area where Moore Park Campsite was found, 1870s (State Library of NSW - ON 4 Box 55 No 222)

An Aboriginal campsite was discovered in 2014 beneath the car park of the Moore Park Tennis Centre. It was unearthed during archaeological excavations brought about by the proposed construction of a light rail line through the area. The surrounding area once contained sand dunes and swamps, but over the last 200 years the dunes have been flattened and the swamps have been drained. Today the landscape is covered by grassy parklands, roads and buildings. These impacts and the constant shifting of the dune sands before that, have removed or covered much of the archaeological evidence of past Aboriginal use of this area. But an ancient fireplace uncovered at Randwick, shows that Aboriginal people lived in this dune landscape for thousands of years before the arrival of Europeans.

Underneath the car park at Moore Park, archaeologists found a layer of ‘fill’ (historically deposited material such as gravel and rubble) more than half a metre thick, and under that, remains of the original dune. The top of the dune was missing and some of the remaining dune sands had been mixed with the recent fill material. In the more intact sands below a small number of stone artefacts were found.

The artefacts were manufactured or ‘knapped’ from ancient river cobbles which are not found in the surrounding area. They were probably sourced from tens of kilometres away to the west or south. A piece of stone was cut from one of these large cobbles to serve as the ‘core’ or base stone from which artefacts were made. This was the only core found at Moore Park. Aboriginal people expertly struck pieces of stone from cores using another stone, or sometimes resting the core on a stone anvil.

A range of different tools were created through this process and one of these was found at Moore Park. It is called a ‘backed artefact’ because the side opposite its sharp cutting edge was blunted or ‘backed’ to allow it to be hafted or perhaps even held. We do not know exactly what the backed artefact from Moore Park was used for, but other studies have shown that tools like these had many uses including cutting, incising and drilling. Knapping stone to create tools like backed artefacts also created a lot of waste pieces of stone, most of which were probably not used by Aboriginal people. Most of the stone artefacts at Moore Park were waste pieces like this, but they provide more evidence that Aboriginal people used the dune fields probably to hunt animals and gather plant resources while making tools along the way.