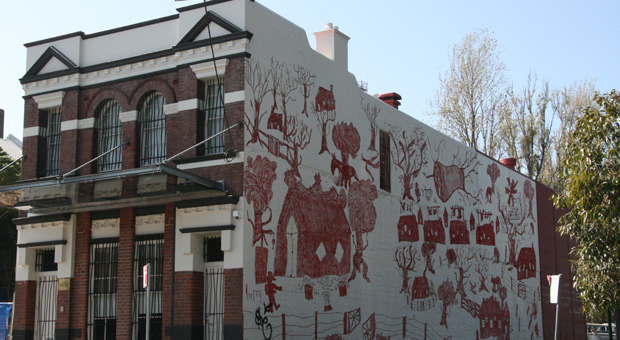 Wyanga Aboriginal Aged Care was established by Sylvia Scott and Mary Silva in 1996 to provide a community aged care service for Aboriginal people in inner Sydney and La Perouse. The service, which today provides home care and residential accommodation, was initially based in Waterloo.

In 2005, a former hardware shop on Cope Street was converted into a permanent home for Wyanga and its residents. The southern wall of the building features the distinctive mural Mission Boy Dreams, which is based on an etching by Wiradjuri artist Roy Kennedy. It depicts his memories of the Warangesda Mission in the Riverina where his family is from.

Kennedy was born in 1932 at Darlington Point near Griffith. He studied print making at the Eora Centre in the 1990s, and later joined the Boomalli Aboriginal Artists Cooperative. He was the winner of the Parliament of NSW Aboriginal Art Prize in 2009 for his Mission Series 2.