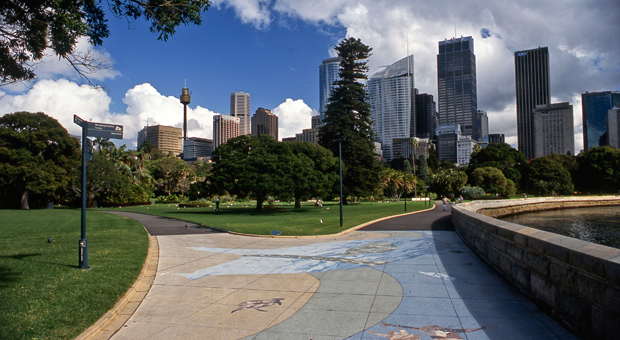 Wuganmagulya (Farm Cove) is an art installation within the Royal Botanic Gardens which honours the original clans who lived on the site, as well as those who held ceremonies there.

The artwork is in the form of a mosaic inlaid into the footpath along the foreshore of Farm Cove, and incorporates terrazzo and stained concrete. It depicts rock carving figures similar to those found elsewhere in the Sydney basin, and the names of women and men, places, animals, tools and rituals from the clans and language groups of the Sydney area.

The artwork was created by Brenda Croft, a Gurindji woman who was a founding member of Boomalli Aboriginal artists cooperative. Wuganmagulya (Farm Cove) is part of the Sydney Sculpture Walk commissioned by City of Sydney.