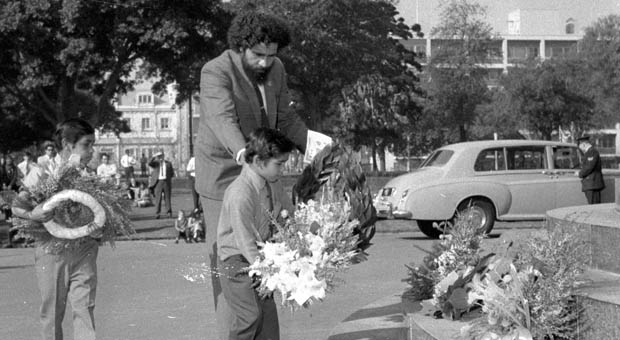 On National Aborigines’ Day in July 1969, a crowd of about 400 people gathered in Hyde Park south and watched as two Aboriginal children laid wreathes on the curved steps of the Anzac Memorial. They were led by the secretary of the National Aborigines’ Day Observance Committee (NADOC), Ken Colbung, a Nyoongar man from Western Australia, himself a veteran of the Korean War. On the same day, wreaths were laid at the cenotaph in Martin Place. These ceremonies to honour Aboriginal ex-servicemen and women were the first of their kind in Australia.

To the group of 34 Aboriginal veterans who had marched along Hyde Park’s central avenue to join the ceremony, the Lieutenant Governor of NSW, Sir Kenneth Street said, ‘There can be no greater demonstration than your presence here today of the part Aboriginal servicemen played when the call came to take up arms. I would like to borrow one of Sir Winston Churchill’s statements and say that Aboriginals also gave their ‘blood, sweat, toil and tears’ for their country.’

The movement to recognise Aboriginal and Torres Strait Islander military service has gained great momentum in recent years. Since 2007, thanks to the national advocacy efforts of Wurundjeri elder Aunty Dot Peters, a commemoration service is held in each capital city during Reconciliation Week in May. In Sydney this takes place at the Anzac Memorial in Hyde Park.

Meanwhile, Redfern observes Anzac Day with the annual Coloured Diggers’ march, initiated by the Babana Aboriginal Men’s Group in 2007. The march sets out from the war memorial in Redfern Park then proceeds along Redfern Street to the Redfern Community Centre where a commemorative service is held.

‘The Coloured Diggers’ march is very important’ says Gumbaynggirr elder Rob Bryant, who served with the RAAF in Vietnam. ‘It gives Aboriginal and Torres Strait Islander people the opportunity to participate in Anzac Day celebrations, on their terms. They all march with the veterans up front, and they’re all representing their uncles and aunties and fathers. It is an opportune time for the Aboriginal people to participate and celebrate their connection with Anzac Day on that day – and it’s on their terms.’