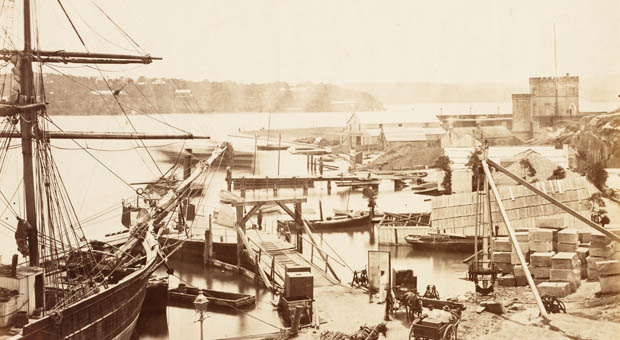 The dilapidated Marine Board ‘government’ boatsheds on the eastern side of Circular Quay, with Fort Macquarie in the distance c 1875 (Mitchell Library, State Library of NSW - DL PXX 73/21-36)

The government’s Marine Board boatsheds were on the eastern side of Circular Quay at Bennelong Point, just to the south of Fort Macquarie and the Sydney Rowing Club boatsheds.

Around 18 Aboriginal people were camped here from 1879 through to July 1881, including members of the Davis and Bundle families. Recent research suggests they were receiving weekly rations of meat, bread, tea and sugar, similar to the rations received by Aboriginal people at the Botany camp. It was likely they were forced to live in this, by then derelict, boatshed because they were dispossessed from their land due to farming and pastoral activities.

The camp at the government boatsheds closed in July 1881, with many moving south to Daniel Matthew’s Maloga Mission. As well, large numbers of Aboriginal people were ‘encouraged’ to join the growing community at La Perouse.

Blanket distribution lists from the 1830s show that, apart from this group living in the government boatsheds at Circular Quay from 1879 to 1881, few people who identified as Aboriginal were living in the centre of Sydney in the late 19th century. Many had moved to places such as La Perouse on Botany Bay, south of the city.