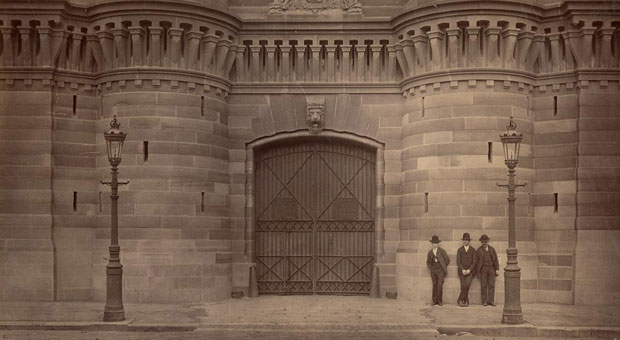 Darlinghurst Gaol began construction in 1822 and was opened in 1841 to replace the ageing and overcrowded Sydney Gaol on George Street near Circular Quay. It took 50 years to complete, with new buildings being added to accommodate the increasing population over the following decades.

Aboriginal people were among the many prisoners incarcerated at the gaol until it closed in 1914, by which time all prisoners had been transferred to the new men’s and women’s prisons at Long Bay. As the main Sydney gaol for the second half of the 19th century, it housed everyone from murderers to those who could not pay their fines for petty offences such as drunkenness.

The gaol sat on the ridge between Woolloomooloo and Rushcutters Bay. Aboriginal people lived nearby while the gaol was in operation, including at Barcom Glen just below the gaol until the 1860s, and elsewhere around Rushcutters Bay until around 1900. While some were inmates at Darlinghurst, usually for minor offences, most Aboriginal prisoners came from elsewhere across NSW.

Sydney was the heart of the colonial justice system, and Darlinghurst Gaol came into operation when colonial expansion across the state was underway. Aboriginal people were arrested for offences such assaults, murders and spearing cattle on the colonial frontier, and for a range of other crimes as they tried to adjust to life under colonial rule.

The poor conditions in the gaol contributed to the ill health of prisoners, and some of the Aboriginal inmates died. There was an awareness that Aboriginal people were more susceptible to illness and also depression (‘despondency’) while incarcerated, though it rarely led to any preventative action. For example ‘Dicky’, whose 1864 death sentence for rape was commuted to a life sentence, was transferred to the Parramatta Lunatic Asylum from Darlinghurst Gaol in 1868. He was returned to gaol in 1869 and died of influenza in the gaol hospital in 1872.

Some Aboriginal prisoners received training in stonemasonry in the 1850s and 1860s. In 1876 several skilled Aboriginal weavers at the gaol had their mats displayed at the Centennial International Exhibition in Philadelphia.

Aboriginal offenders in NSW were sentenced to anything from several days to years to life in prison, and at least two were among the 79 prisoners executed at the gaol. One of those to hang was the most notorious Aboriginal inmate at Darlinghurst Gaol, Jimmy Governor (1875-1901). In July 1900 Governor, his brother Joe and their friend Jacky Underwood, murdered a family at Breelong (north of Dubbo) for whom Jimmy had been working. They went on the run, killing several more people, and were subject to the biggest manhunt in Australian history. Jimmy was caught several months later at Wingham, near Taree and was brought to Sydney for trial, where he was found guilty and sentenced to death in November 1900. He spent his final weeks at Darlinghurst Gaol, where his fluctuating daily moods and discussions with gaol guards were meticulously recorded in a macabre (but standard) diary up until several days before his execution by hanging in the gaol on 18 January 1901.

Since the closure of the gaol in 1914, the building has been used for a very different purpose. For most of the past century it has been home to the National Arts School, which has numbered Aboriginal people among its many students.