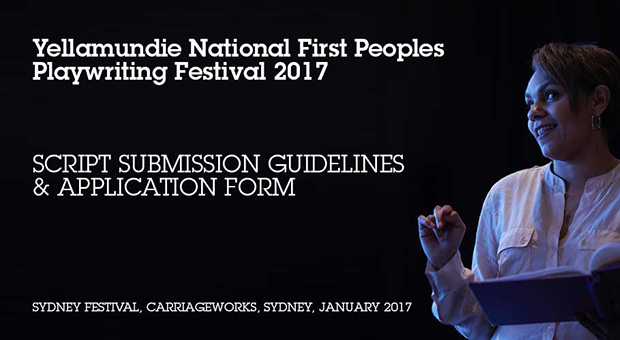 Moogahlin Performing Arts is looking for 6 new scripts from across the continent to be developed as part of the next Yellamundie National First Peoples Playwriting Festival in January 2017.

Find out more and download the guidelines and application form here.

Yellamundie National First Peoples Playwriting Festival (formerly Yellamundie National Aboriginal and Torres Strait Islander Playwriting Festival) identifies, develops, and presents new First Peoples playwriting that displays potential for further development and/or production. Since its inception in 2013, this biannual festival has developed 12 new scripts from beginner, mid-career and established playwrights from regional, remote and urban areas. Sixteen scripts in total have had public readings; with 7 scripts picked up for further creative development and 3 new works produced professionally. In 2017 the Festival program will expand to include international collaboration, exchange, and script readings with other First Peoples from Aotearoa (New Zealand) and Turtle Island (Canada), as well as public panel discussions, and opportunities for First Peoples dramaturges and producers to be involved.